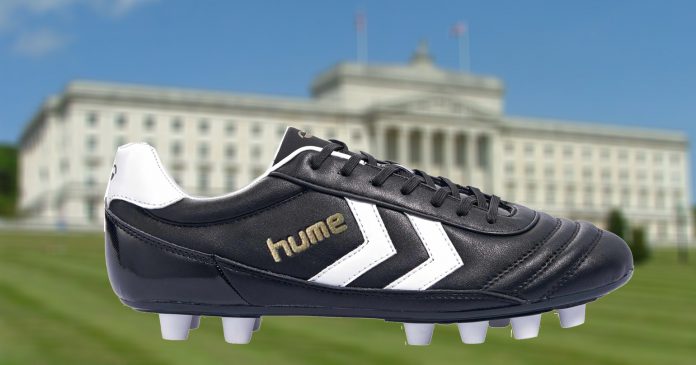 A pair of boots which historians believe belonged to “a giant of a man” have been sitting unlaced and unfilled in Stormont for almost 20 years, The Ulster Fry has learned.

“They don’t make them like this anymore!” explained leading footwear historian, Dr Marten. “They had a smart upper, a beautiful sole and a wonderful tongue.”

“And they could also deliver a resounding boot up the hole if needed” he added.

The classic boots, which have the name “Hume” written on them, are said to be so impressive that NI’s current politicians have all tried to fill them down the years and failed.

“We’ve all had a go at putting laces in them!” admitted Sinn Fein leader Michelle O’Neill as she fondly admired them. “But none of us have ever managed it, sadly.”

This was echoed by the DUP’s, Arlene Foster. “Yeah like our predecessors, Michelle and I have not quite been up to the task. Not even the two of us together could manage it, could we?”

“Naw, one of us would criss, and the other would get cross.” explained O’Neill. “We’ve been trying for years now.”

However it isn’t just the political elite at parliament buildings who will forever remember them.

“They left an unforgettable, permanent mark all over these corridors” explained one cleaner we spoke to. “A real lasting legacy”

“Hopefully someone will fill them soon”