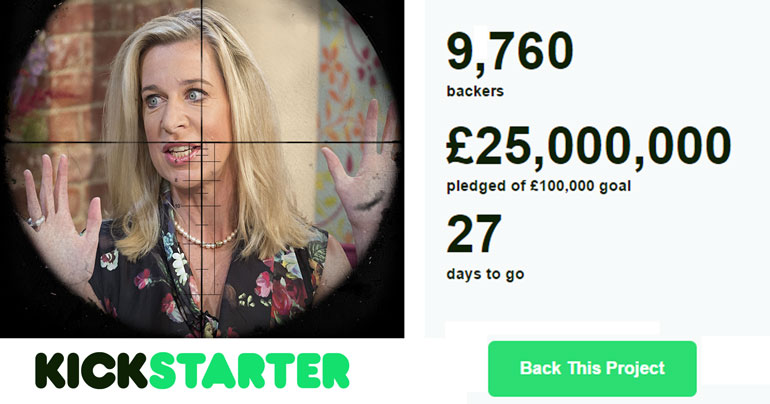 A Kickstarter project promising to crowd-fund the services of an international assassin to take out celebrity shitehawk, Katie Hopkins, has set a new record on the site as the quickest start-up idea ever conceived.

The campaign which began with a target goal of £100,000 has received 250 times that amount in only 24 hours, as people from across the world backed the project to the tune of £25 million. Campaign organiser, Belfast man Kevin Breslin, said he was ‘blown away’ by the response to his plan, and that he hoped Mrs Hopkins would ‘soon be blown away by the idea too’.

“We only intended to cover the costs of whacking Katie herself” explained Breslin. “The assassin’s fee plus expenses. Flights, forged passports, seedy motel room… that sorta thing. But with this money we’ll be able to take her out plus the journalists and media folk who perpetuate her hatefulness by giving her airtime! Hopefully we’ll get some sort of group discount!”

The campaign started just hours after Hopkins latest humanitarian tour-de-force, when she mocked the public reaction to the death of Cilla Black within hours of her passing. “I just read that and thought ‘Jaysus, what a cockrash! If I’d a big bag of money I’d hire an assassin to take her out’. Then the idea hit me. If everyone feels the same, we can all chip in, stick an ad up on Guntree or wherever.”

In a double surprise that Cilla herself would be proud of though, a spokesman for the International Federation of Assassins revealed that they were prepared to carry out the work for free. “Blind Date was class. Your woman Hopkins is a dose!” revealed top assassin, Joaquin Peoples. “This one’s on the house!”

The campaign page has already been updated to reflect the new direction of the project, which is now developing a mobile app to help journalists who continue to write about Katie Hopkins see sense. However in early an beta-test of the technology the app confusingly seemed to make a closed-loop FaceTime connection to our phone’s own camera.

“Nah that’s how it works” explained Breslin. “These pricks need to have a f**king word with themselves!”