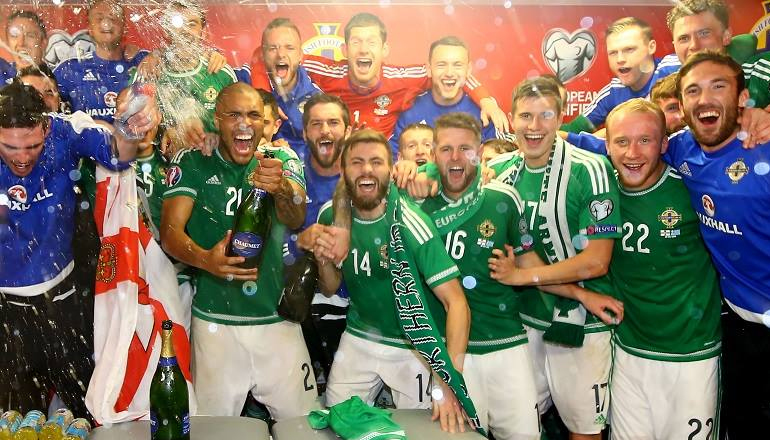 After years of pessimism, Northern Ireland football fans are said to be “reeling” this morning after their team accidentally qualified for Euro 2016 against all the odds.

After a stunning 3-1 victory against Greece last night, Northern Ireland sit top of their group and are guaranteed qualification. However even before the first Panini sticker of Gareth McAuley has been printed, fans are beginning to worry that their team, or the IFA, will still find some way of screwing things up.

“It doesn’t make sense,” said Ken Gillespie, a Portadown native who we found wandering in a daze around Shaftesbury Square this morning. “We never qualify. Something always goes wrong at the last minute. The chances are that the IFA will accidentally book the team into a hotel in Mexico, or the French air traffic controllers will go on strike and the team will be stuck at Aldergrove for the duration of the tournament.”

Antrim fan Willy Bingham was similarly confused. “I spent this morning researching Kyle Lafferty’s family tree. I’m pretty certain it’s going to emerge that he’s Brazilian and not eligible to play for us. Then UEFA will strike all his goals from the record, we’ll be dumped out of the Euros and big Kyle will be picked for the Brazil team in place of Neymar.”

Steven Davison from Ballymena was also cautious. “What if David Cameron pulls the UK out of Europe?” he asked. “Then we might get expelled from UEFA and end up having to play in the African Cup of Nations or something. Either that or thon volcano in Iceland will kick off again and we’ll be stranded.”

Steven’s girlfriend Norma Whiteside had even bigger worries. “I reckon UEFA will send the documentation to Martin O’Neill instead of Michael.”

“That’d be a f**kin’ shitemare altogether.”