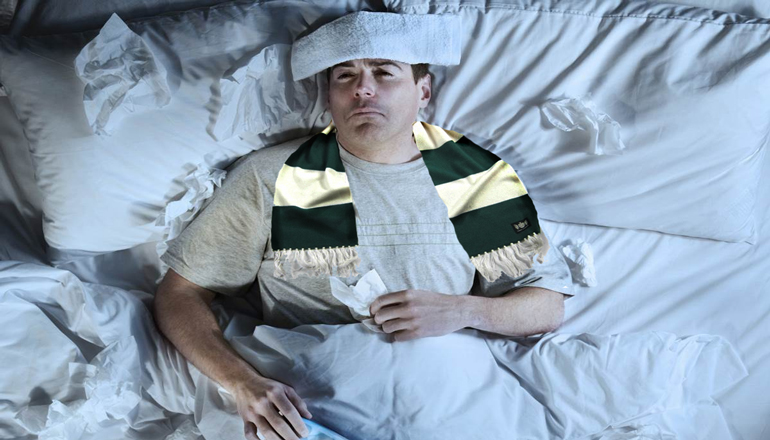 Employers are bracing themselves amid concerns that a mystery virus may sweep through much of Northern Ireland’s male workforce tonight.

According to experts the illness, which has been dubbed ‘Greek Influenza’, could hit Belfast at approximately 9.30pm this evening, provided Northern Ireland don’t make a ballix of qualifying for the European Championships. The virus can be recognised by symptoms that include random fits of loud slabbering, erratic body movements such as bouncing,  a craving for meat shavings and an intense fear of working. Radical treatments for the virus include the administration of large doses of tonic wine.

Reports suggest that the source of the outbreak is likely to be around Donegall Avenue and everyone attending tonight’s international fixture at Windsor Park risks infection. Greedy McBallix of the South Belfast Northern Ireland Drinking Troupe told us, “I was just saying to the wife this morning that I wasn’t feeling the best. It wouldn’t surprise me if I’d caught that aul Greek cold. That’d be just my luck, especially as my annual leave ran out in July.”

Medical officials believe they have discovered a link between Greek Influenza and a similar virus that spread in 2005. According to Dr Pierre Triage from the Ulster Hospital’s Man Illnesses Dept “We had a similar outbreak ten years ago when Northern Ireland beat England 1-0. Unlike the Greek Influenza, no one saw that coming. By the time the fans got to Tates Avenue the offies had closed so the symptoms weren’t as severe.”

Dr Triage had advice for the wives and girlfriends of those who will be suffering from the illness tomorrow. “Greek Flu can be fatal if the man is neglected,” he warned. “A man suffering from this flu wants nothing more than to get off his hole and go to work but he is too selfless to risk spreading the virus.”

“While it may seem like he is just lying around enjoying ‘Jeremy Kyle’ it is a commonly recognised medical fact that the exact pitch and frequency of Jezza’s voice has remarkable soothing powers, like eucalyptus oil.”