“I don’t believe in Theresa May”, admits Santa Claus 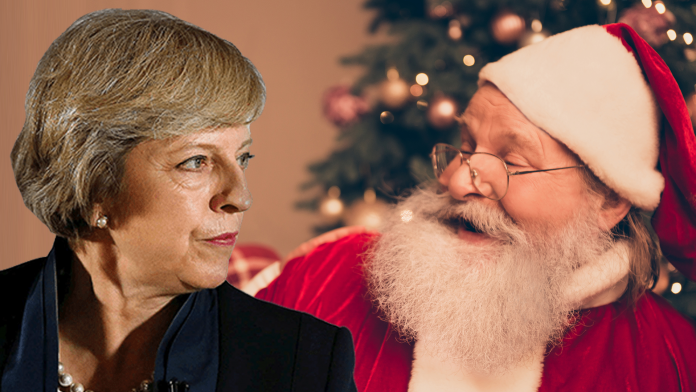 With a vote of no confidence set to decide the future of Theresa May later tonight, Santa Claus has piled pressure on the beleaguered PM by admitting that even he doesn’t believe in her anymore.

“I wrote a letter of no confidence in her and sent it to myself!” explained Santa earlier. “A hard border and poor trade tariffs could cripple my delivery business. I can only work one day a year as it is!”

“At the end of the day I’m a migrant worker,” continued Mr Claus. “You’ve already got a whole rake of under-qualified pretend Santas cluttering up shopping centres every year, if the market gets any more deregulated I could be out of a job completely.”

However despite unrest amongst Tory back benchers, not all her colleagues want her gone before Christmas.  “I’ll really miss feeling her presence in Downing Street if she goes!” admitted Chancellor Phillip Hammond.

Speaking to reporters, Mrs May said she believed she’d survive tonight’s vote despite the intervention of Santa “Backstop” Claus.

“And I’m going to find out who is naughty… and who is a back stabbing bastard!”