Ian McShane to play Lovejoy in Game Of Thrones 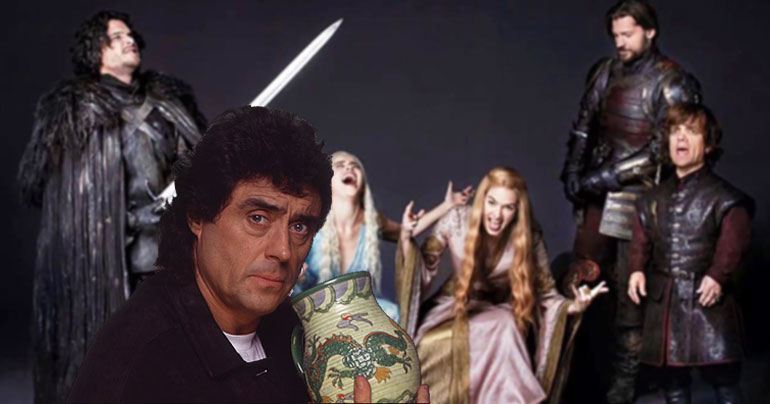 Following news that Ian McShane is joining the cast of Game Of Thrones, the Ulster Fry can exclusively reveal that the English actor is sensationally set to reprise the role of ‘Lovejoy’ in HBO’s epic fantasy drama.

The internet had been rife with speculation about which character from George R.R. Martin’s vast world McShane would play in season 6, however in the latest of controversial deviations from the original books, it seems HBO are introducing the rogue antiques dealer into the fantasy epic in a bid to appeal to the the older viewer.

“After five epic seasons in Westeros full of sex, blood, gore and betrayal, we felt it was time for a new direction” said producer Don Sizemore. “We’ve created a lavish world in Westeros, full of treasure and ancient trinkets – and Lovejoy will let us delve into that rich tapestry as he travels the seven kingdoms sniffing out bargains, haggling for the best price and foiling forgery swindles before they happen!”

Lovejoy’s introduction also provides an answer to another mystery perplexing fans  after actor Kit Harrington was spotted in Belfast despite the apparent death of Jon Snow.  “Aye we’ve re-cast him as Lovejoy’s sidekick, Tinker Dill” continued Sizemore. “We needed someone suitably short-arse enough to play the part and Kit was the obvious choice. He’s a bit too skinny still, but we’re bulking him up with plenty of Belfast baps, Maine lemonade and fish suppers, but sure he loves Northern Ireland, so he’s totally in his element!”

Like all characters in Westeros, Lovejoy will spend the season plotting his rise to power, however it seems his motives are slightly less sinister than most. “Aye he’s got a buyer lined up for the Iron Throne” explained Sizemore. “He got it valued at Sotheby’s and turns out it’s worth a clean fortune! Like all those who play the Game of Thrones though, it won’t be long before a nemesis for Lovejoy is introduced in dramatic fashion”

David Jason was unavailable for comment on the news that Del Boy would be joining Lovejoy in the cast of season 7 – or their upcoming sex scenes.