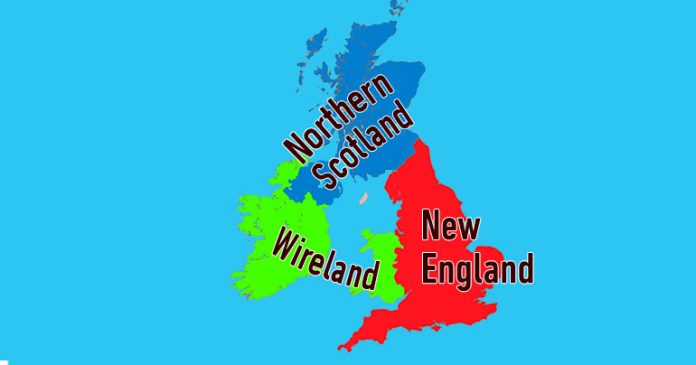 Wales could be ceded to the Republic of Ireland under new Brexit proposals leaked to The Ulster Fry.

The news follows reports that 47% of the UK population has now applied for an Irish passport, with officials in Dublin admitting that they won’t be able to cope ”if they all land home at once.”

“What if they all come for Christmas?” asked senior Irish diplomat Iris-Ann Uachtaráin. “We wouldn’t have enough chairs to go round, never mind beds. We thought about building a conservatory off the coast of Galway or converting Cork into a granny flat, but even if we put bunk beds in every room we’d struggle to house them.”

UK official Ben Downing-Street confirmed that “Wales is on the table.”

“It makes perfect sense to move the Irish border to Monmouthshire,” he told us. “There’ll plenty of space in those valleys for all the new passport holders and the Welsh talk funny and seem to like sheep, so the Irish will fit right in.”

“In an ideal world we’d give them Northern Ireland instead but to be fair, who’d want that pack of argumentative hallions.”

If the deal comes to fruition, the Republic will get Wales, Scotland ends up stuck with Northern Ireland and England will join America.

“We are not amused y’all,” said new US President, Lizzie-Beth Windsor.