“I’ve a place for EVERYONE involved in these Brexit negotiations,” says Satan 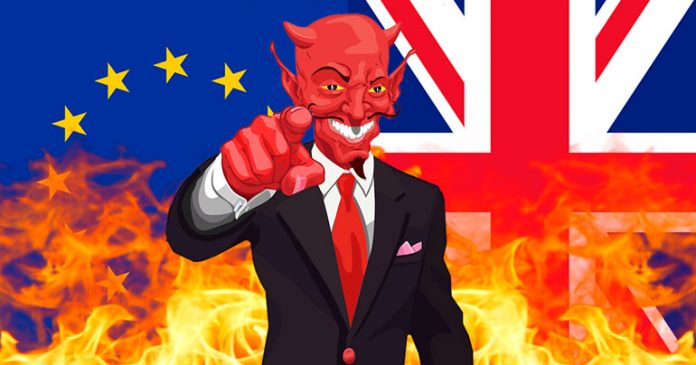 Following the comments of EU Council President Donald Tusk, in which he said there was a special place in hell for those who campaigned for Brexit without a plan, Satan has come forward to reveal he is planning accommodation for everyone involved in the negotiations.

Speaking from his holiday caravan in Portrush, the Prince of Darkness told The Ulster Fry that he’d “had it up to his horns with all the f**king arguing.”

“Brexiteers, Remainers, the EU, I’m sick of the lot of them,” he growled, through an interpreter.

“Every time I turn on the news there’s some new crisis, how are you meant to come to an agreement when everyone involved wants to nail the other side?

“It’s a perfect shitstorm. The EU are worried in case some other countries might fancy leaving and the British are more confused about what they want than a sex addict in a brothel.”

“Theresa May is as much use as a set of chocolate gates of hell, Jeremy Corbyn is more concerned about building a socialist utopia and that flaccid bastard Mogg is prowling around the sidelines like some kind of Victorian mill owner worried about cotton imports from the New World.”

“In the middle of it all is Northern Ireland, where you’ve the DUPers posturing like they’re the last saviours of British democracy, when we all know they just don’t like Europe because Rome is in it, and the Shinners are shouting about unity polls and doing amateur dramatics along the border, building Styrofoam walls so they can knock them down with plastic hammers.”

“So aye, I will be building a special place for all of these f**kers, knocking a few walls through and installing a couple of those RHI furnaces.”

“I’m particularly looking forward to unleashing my horde of demons on Sammy Wilson.”