Jackie Fullerton quits the BBC to concentrate on acting career. 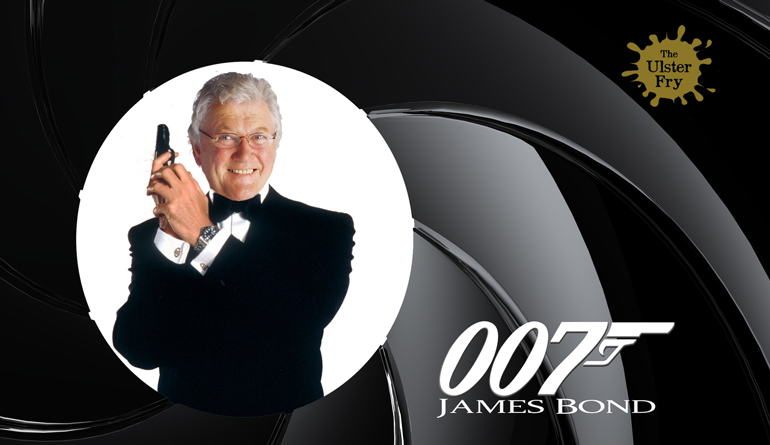 Football fans in Northern Ireland reacted with dismay today as it emerged that veteran commentator Jackie Fullerton has been sensationally “retired” by the BBC, just before the Euro 2016 finals.

However the Ulster Fry has learned that this was a calculated move by the legendary broadcaster, as he has an even more impressive job lined up – replacing Daniel Craig in the role of 007.

“Jackie has been considered for the role before,” said our source at Broadcasting House, “when Roger Moore stepped aside, Jackie was being lined up to play Bond in The Living Daylights. His suave personality and ability to carry off a safari suit made him an ideal candidate, but sadly the producers opted for Timothy Dalton, and it took the movie franchise years to recover.”

Director Sam Mendes, who has been behind the camera for recent Bond outings, admitted that casting the 72 year old football commentator would require a change in approach. “Aye, Jackie is probably not as physically fit as Daniel Craig, so we’ll have to cut out a lot of the running about that Bond gets up to. Mostly he’ll just sit in a commentary box making astute observations on work of some evil super-villain, whilst occasionally getting over-excited about a pass by Chris Brunt.”

“We’ll also have to lose Bond’s trademark dinner suit and replace it with a well cut sports jacket and a pair of Farah slacks, and the “shaken not stirred” Martini with Gin and Lilt.”

The Ulster Fry understands that Fullerton’s first outing as Bond is slated for 2017, in a movie provisionally named From Windsor Park With Love.