Jedward to record the Sash after Wagner goes Provo 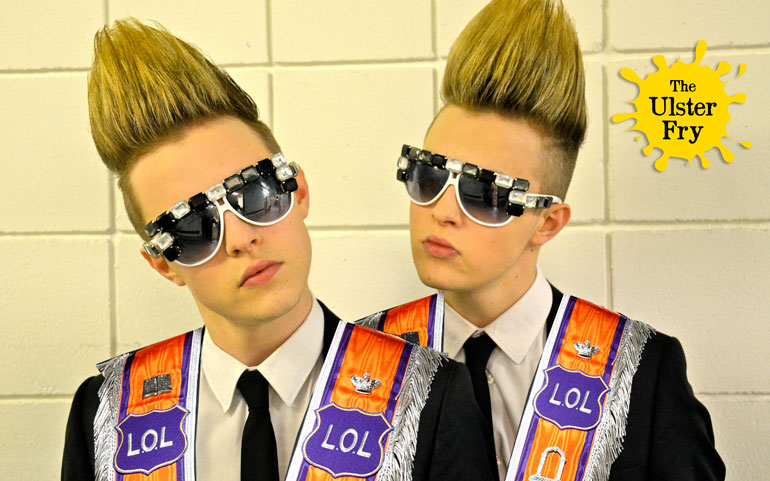 Following the release of a controversial video showing former X-Factor hopeful Wagner singing ‘Oo-aah up the Ra’, fellow vocally challenged shite-hawks, Jedward, are getting in on the new ‘Ulster Chart’ craze by recording a poptastic rendition of the Sash.

“It’s gonna be like. so. like. amazing. and stuff” said brothers Jed and Ward, as they annoyingly finished each others sentences this evening. “we’re gonna make it like, fun and cool and add in some new dance moves. and stuff. YEAAAHH!!!!” they excitedly added with a high-kick, followed by the splits, in gold spandex.

Seeing the opportunity to cash in, X-Factor boss Simon Cowell, whose surname reveals that his foundered ancestors obviously came from Northern Ireland, immediately announced a new ‘Ulster theme’ on the first live show this Saturday.

“We were gonna do another Elton John, Michael Jackson or Queen night” revealed Cowell. “but when Wagner went viral earlier by inadvertently cheering on the Provos, I knew we were onto a winner!”

“Thon was quare value!”  he laughed.

Tensions are understood to be mounting at X-Factor camp tonight, where stressed out contestants spent the evening bickering and squabbling over their favourite Republican and Loyalist songs.  “F**k away off hi. I want to sing ‘The Billy Boys'” cried an emotional Louisa Johnston to her mentor, Rita Orange. Meanwhile bad boy Mason Noise has his heart set on singing a rap rendition of Irish National anthem, ‘A Soliders Song’, in the hope he can fool judges into thinking he served in the armed forces.

This isn’t the first time X-Factor has come into contact with complex political situation in Northern Ireland of course. Former contestant Chico has, for the last two years, been living in a caravan on Twaddel Avenue, determined to finish the career he once started.