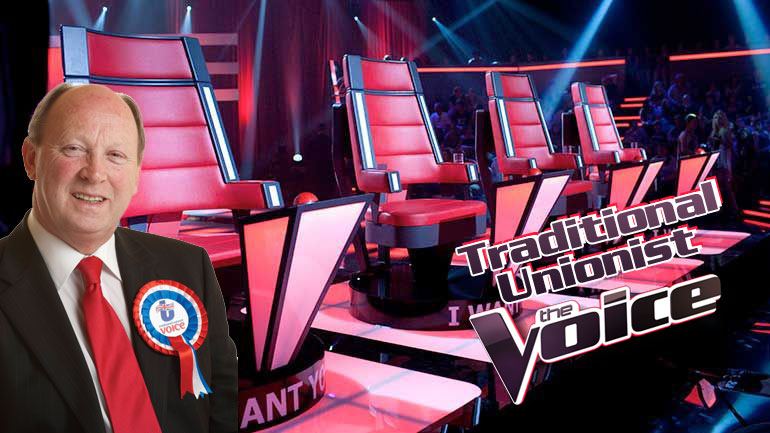 In a sensational move guaranteed to thrill fans of both music and politics, TUV leader Jim Allister is to be head judge on a new version of talent show The Voice.

It is understood that the controversial North Antrim MLA pitched the idea to top BBC execs after becoming increasingly concerned about what he describes as ‘a lack of Loyalist music on mainstream television.’

“Mr Allister will chair the judging panel,” a network insider told us, “but he’ll be joined by a couple of other big hitters from the music industry.”

Paloma “one true” Faith will stay on, as will her her co-judge King Will.i.am of Orange, but there’s no place for Boy George.

“Jim wasn’t happy with the whole Gay thing going on there and we’ve had to replace him,” our source revealed. “Forunately we’ve lined up baby Prince George to take over in the chair.”

Needless to say the musical acts are somewhat limited in their repetoire, but some are doing their best to modernise traditional unionist tunes.

“We’ve seen some strange combinations,” says our insider, “with a genuinely moving ballad version of The Sash and an experimental Lambeg Drum and Bass take on Derry’s Walls.”

Pilot episodes of the show have already been filmed, but so far there’s been little agreement between the judges. Baby George is only interested in anyone who sounds like The Wiggles and Jim himself says he won’t turn for anyone.

The Traditional Unionist Voice is expected to air in 2017, book early to avoid disappointment.