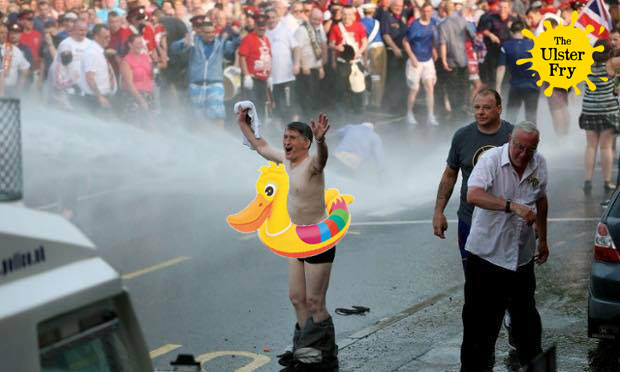 A waterpark event allegedly planned for Belfast this summer has been removed from Facebook over fears it is a load of auld shite.

Thousands of gullible Like and Share merchants had expressed their interest in free tickets to the Summer Safari Waterpark event and have now been left devastated by the news of being stroked.

On the event’s Facebook page the organisers claimed that they’ll “be secluding off an area to host our outdoor Water Park in your city, so let’s get Wet n Crazy!!”

According to two unelected community activists from across the barricades, the alarm bells about the rang loud because of the vague possibility of fun during what is normally a depressing time for Northern Ireland.

Mervyn McMillitant was delighted to be given relevance and said: “When I heard of this water slide thingy coming here, I knew it was a scam because if there’s a scam to be had – then we’re involved.  Besides, all the free space we have in our area is secured for bonfires.”

In a strange turn of events, his cross-community counterpart Terry O’Troglodyte was in full agreement, saying “I knew this was some sort of joke because we don’t have any green space to put this on.  Any space we had now has a big illuminated 3G pitch on it.  Fair enough like, nobody can afford to play on them but at least it stops the hoods from burning cars on the grass that was there.”

The news comes days after a Total Wipeout tour of Northern Ireland was also found to be a hoax.

“I’m afraid the only total wipeout we’re expecting here is at the Avici concert in August, when 20,000 spides will cram into Boucher playing fields off their chops” confirmed Rodney Jobsworth from the PSNI’s Anti-Craic Division.