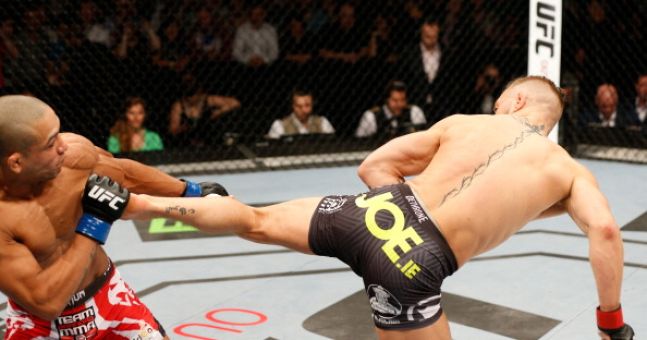 Following his defeat at the hands of Nate Diaz, executives at lads website JOE had an emergency meeting this morning to discuss the possibility of writing an article that isn’t about the bearded Irish UFC fighter, Conor McGregor.

However top-brass at the website are reportedly nervous that lack of Conor McGregor in the articles might lose their core audience.  “Maybe if it was Conor McGregor’s tips for saving your iPhone battery life” said one desperate executive. “He could show our users how to switch on airplane mode, whilst on an airplane.  Maybe that he just bought… with a wheelbarrow full of cash. What do you think?”

However some felt the McGregor hype train still had some mileage.

“I think we could generate a couple of weeks of content by documenting Conor’s cuts and bruises?” suggested junior editor Shay Kweight. “We could give people hourly updates on the healing processes and have posts like ‘You’ll never believe what Conor McGregor’s eye looks like now’ only to show a photo of him wearing dark sunglasses and then just wildly speculate that his eye must be in some state altogether. Sure people love that kinda click bait stuff… don’t they?”

Whilst all agreeing that they could still rip the arse out of Conor McGregor stuff for a while yet, the board agreed that they’d need to find another topic to post about soon.

“We’re all been Googling our holes off here looking for something good” said JOE contributor Dexter Fletcher “it’s just a pity you lads opened that crisp sandwich shop last year…” he added.