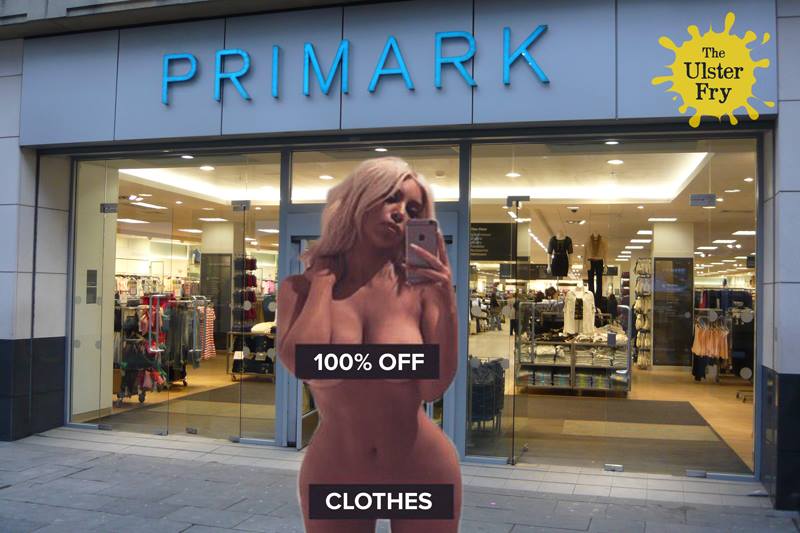 Large arsed celebrity Kim Kardashian has revealed that the nudey photo she released on Twitter today was part a publicity stunt for her new modelling contract with retail giant Primark.

The star flew in to Belfast today to launch the store’s “100% off everything” campaign, telling reporters “some days you can’t be arsed getting dressed properly, and that’s where Primark comes in handy.”

“Tomorrow is International Women’s Day, and this campaign is all about empowering women,” she revealed. “By posting a photo of my gazonkers on Twitter I probably hope other women across the world will feel empowered or something, then go to Primark and get a rake of cheap bras.”

“The photo itself was just a bit of craic,” continued the camera shy   randomly famous rich person, “a quare big bit of craic if you saw the rear view I’ll tell ye.”

As news hit the high streets shoppers flocked to their local Primark stores to avail of the 100% off clothes promotion, but not all were happy with the discount.

“It’s great that the clothes are a wee bit cheaper than normal now,” said  Ballymena woman Jacinta Leggings, “but the hoors are still charging 5p for bags. I told them to stick their bags up Kim Kardashian’s arse.”

We put this complaint to Primark, who responded with a statement saying, “That’s OK, there’s plenty of room up there.”