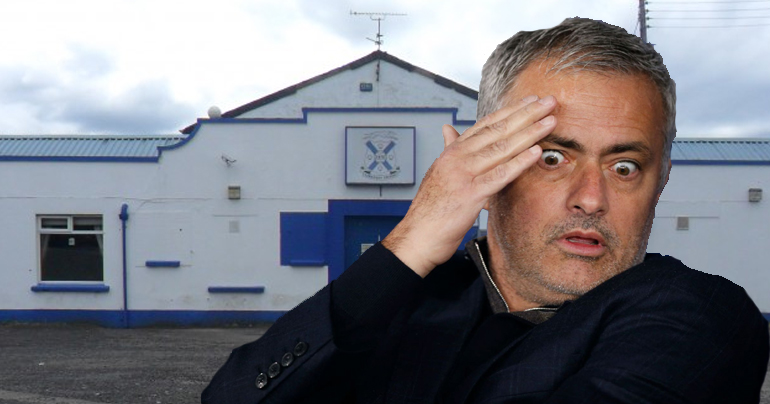 Controversial manager Jose Mourinho has inadvertently found himself manager of North West side Limavady United, after what has been described as ‘a simple mix up over plane tickets.’

It is understood that the former Chelsea chief was expected to agree terms with Manchester United this afternoon, but a booking error led to him boarding a flight to City of Derry Airport rather than City of Manchester.

On arrival it is believed that Mr Mourinho’s agent hailed a taxi and asked to be taken to ‘United’s ground’, and of course was ferried to the nearby Limavady Showgrounds. Once there, the Portugease icon mistakenly believed the Manchester club had arranged for him to be taken to a secret location to avoid the press, so failed to realise he was in the wrong place.

As a result he now appears to have ended up signing a 3 year deal at the club for a mammoth £420 a year, with £4000 and a used car available for new signings.

Dozens of people assembled in a street nearby chanting after the ‘Special Wan’, however it later emerged they were just a load of hungry folk trying to order a snackbox from a local chinese takeaway.