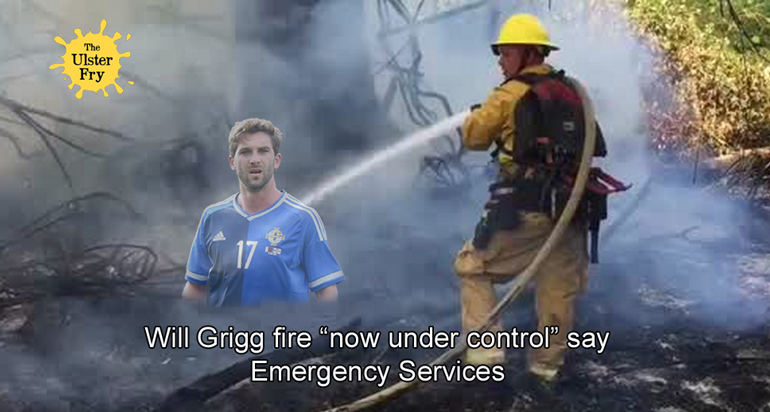 An ongoing conflagration involving football international Will Grigg has been safely dealt with, according to a statement released earlier today by the Northern Ireland Fire Service.

The Wigan Athletic player is believed to have been set alight at some point in April, and has been burning uncontrollably since then. Fortunately the blaze was spotted by his club’s fans who raised the alarm by singing about it repeatedly at matches.

“Our fire-fighters have been struggling to bring him under control for several weeks,” said brigade chief Fred Adair. “It was a very dangerous operation for our officers, as there was a very real danger that the fire could spread from Mr Grigg to a nearby petrol station, which would in turn threaten numerous local homes and businesses.”

The news will come as a relief to Northern Ireland manager Michael O’Neill who was coming under increasing pressure from fans to pick the highly flammable player purely based on the quality of his terrace anthem.

“It’s a great song,” admitted O’Neill, “but even though he’s in good form it would be a bit of an injury risk to field a player who’s permanently engulfed in flames, although it would have made him a real handful for his markers.”

The Ulster Fry understands that Grigg will now start against Belarus this evening as O’Neill wants him to get some matches under his belt, although that may have been be what caused the problem in the first place.