The Ulster Fry Guide to…. the new Stormont Executive 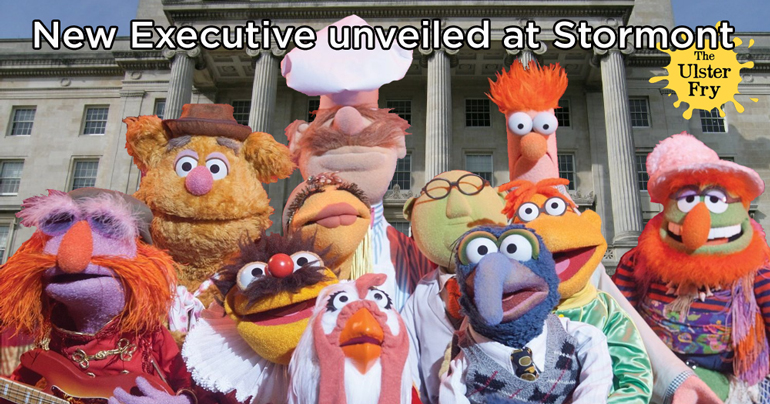 Stormont has an Executive, finally, with brand new Ministers and Departments. With all the changes up on the hill it’s hard for the ordinary citizen to understand what’s going on, so here’s our guide to who they all are, and what they’ll be doing…..

First and Deputy First Ministers: Arlene and Marty of course. Responsibilities: Pretend to like each other at public events then slag each other off afterwards. Look cross.

Junior Ministers: Alastair Ross DUP and Meagan Fearon SF.  Responsibilities: Kinda like support staff for the rest. Stand beside the other ministers looking serious during the various crises that come over the next five years and make the tea at meetings.

New Minister: Peter Weir DUP. Responsibilities: The key role of the Education Minister is to improve the educational attainment of children from whichever side of the sectarian divide they represent. Expect the return of the 11+ and lots of excuses.

Department for the Economy

New Minister: Simon Hamilton DUP. Responsibilities: Meant to promote things like jobs and tourism, but in reality he’ll spend his time at golf tournaments and smiling when crap jobs in call centres are announced, then looking sad when engineering firms close down.

New Minister: Mairtin O’Millionaire SF. Responsibilities: Supposedly controls the cash dished out to the other departments, so very important. In other words he’ll share out the pocket money that David Cameron gives us.

New Minister: Michelle O’Neill SF. Responsibilities: One of the most important departments, so no one wants it. Basically in charge of waiting lists.

New Minister: Claire Sugden Ind. Responsibilities: A job so divisive that neither of the big two parties trusts the other to do it, Claire’s job is to be blamed for everything that involves the police.

New Minister: Paul Givan DUP. Responsibilities: In most societies you’d have a Department for THE Community, but we can’t have that as it might involve getting on with each other. In charge of both the Bru and Arts, oddly, Paul ‘Conscience Clause’ Givan is just the man for the Culture and Arts side of things.

New Minister: Michelle McIlveen DUP. Responsibilities: Her role will be to give out grants to keep culchie voters happy. Amusingly this departments acronym – DAERA – reads a bit like diarrhoea, if you’re a big wean.

All ministers must remember their main responsibility – arguing on Nolan.