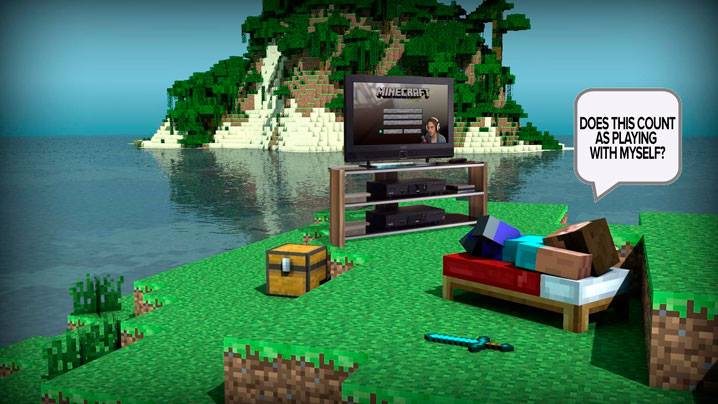 There was much celebration in messy bedrooms across Ulster today, after it was announced that someone at CultureTECH got bored enough to put the entire ordnance survey map of Northern Ireland into hit video game, Minecraft.

Minecraft, a computer game which allows a user to build their own virtual world, was once actually played by kids according to video game historians. However in recent years children’s laziness has evolved so rapidly, they now lie on their arses watching other people play it instead.

“I canny wait to get home from school today, get into my jim-jams and watch someone else having fun on a computer, through my computer” said 10 year old Argos Taylor. “I love Minecraft!  It’s one of the bestest computer games I’ve never played.”

“Aye, no one in Northern Ireland has actually played Minecraft now for about 10 years” says CultureTECH spokesman, Lanyard Doherty. “There are actually only three fellas left in the whole world who actually bother playing it now… everyone else just watches them on YouTube!”

“And by sheer coincidence, they all have the most annoying voice in the entire world” he added.

Early hopes that watching someone else play Minecraft on a localised map would be “beezer” have been shattered though, after an series of typically Northern Irish situations developed.

“There’s heavy traffic at Sandyknowse,” admitted Doherty, “and Portrush has been taken over by square headed spides.” Meanwhile virtual PSNI services were called to a security alert on the pixelated railway line at Lurgan.

“Someone left a suspicious object of some sort” said officer Aide Bitt from the digital PSNI. “but we can’t be arsed to go look, hopefully it’ll be on YouTube later.”