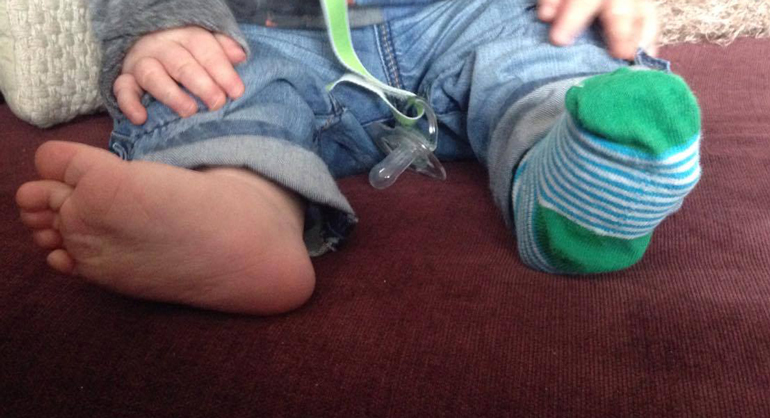 A 9 month old baby from Co Down has stunned experts at the Guinness Book of Records by successfully keeping both of his socks on for a half hour period.

Tom McWilliams, a self-employed fart generator from Dundonald, set the new world record during a car journey into the city centre. It is understood that he maintained his pairing the entire way to Knock, before losing control of his left sock in Ballyhackamore.

This is just the latest in series of successful baby related record attempts by local youngsters. In February 12 month old Lucas Flange from Bangor managed to keep a dummy in his mouth for 75 seconds before spitting it into a puddle, and just last week 2 year old Dungannon girl Hermione Donaghy astonished experts by waking up facing the same direction as she went to sleep in three nights in a row.

However the news has not been universally welcomed. 10 month old Jack Flack, Chair of the Confederation of Baby Industries, has hit out at what he describes as “unashamed Babysploitation” and “a betrayal of the basic principles of infanthood.”

“Everyone knows that babies lose socks as a method of adult control,” he told us. “Bigger people can’t resist baby feet, so random shedding of footwear is essential if we are to maintain our dominion over them. This type of blatant publicity seeking will only encourage other kids to keep their socks on, and it must be nipped in the bud by all right thinking toddlers.”

The record breaker himself was unavailable for comment, as he was too busy eating the discarded sock.