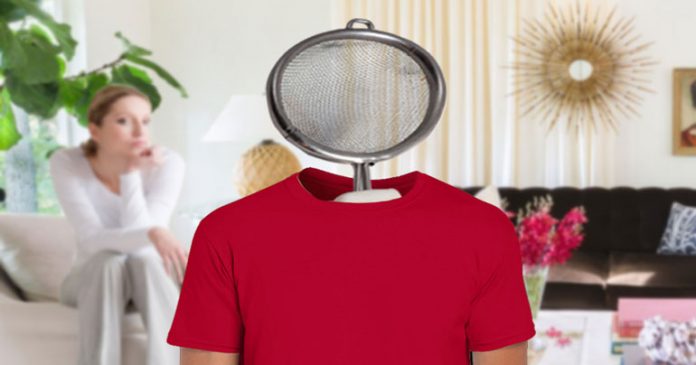 Medical experts are said to be “baffled” this evening after a Newtownards man’s head turned into a sieve.

It is understood that the illness struck 32-year-old Craig Colander when his partner Wanda sent him into the kitchen to complete a simple task.

“I asked Craig to go and switch the oven on, but when I went to make the dinner he hadn’t bothered his hole, he was just standing there drinking a beer and looking at his phone,” Wanda told The Ulster Fry.

“I started to give out to him but he didn’t seem to hear me. That’s when I clocked that his head had turned into a massive sieve.”

“Usually the symptoms are quite mild,” he explained. “For example the subject may be sent to the supermarket to get essentials like nappies and milk, then forget about these and return with a case of Harp and a chainsaw. However in Craig’s case the disease seems to have mutated.”

Wanda has started a Just Giving page to raise money for Craig’s treatment.  “The Doctors here say there’s no cure but I’ve heard of an experimental centre in Brazil that’s getting great results by giving the patient a boot up the hole every time he forgets something.”

“In the meantime I’ll just make the best of it, at least he comes in useful when we’re having pasta.”

Anyone who wishes to donate to Craig’s cause can do so by visiting some site we’ve forgotten because we got distracted.