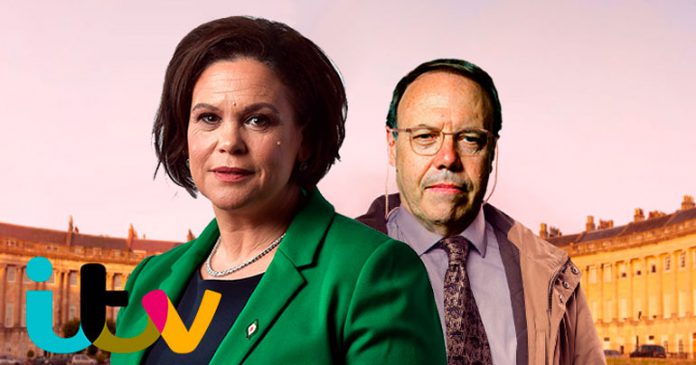 ITV’s has taken its fondness for Sunday night crime dramas featuring mismatched cops to a new level by featuring two of Ireland’s most senior politicians.

“There’s a lot for them to get their teeth into,” we were told by the show’s producer Anthea Christie, “but unfortunately they’re never able to solve anything.”

“We’ll see them investigate how half-wits like Edwin Poots keep getting appointed ministerial positions in Stormont, and how Special Advisers in government departments get their jobs despite having no useful experience for the role.”

“In the first episode, Mary-Lou tries to work out why so many members of her party have such selective memories when it comes to serious crimes. Unfortunately she draws a blank, puts tape round the scene and says ‘move along, nothing to see here’.”

“In episode 2, Dodds carries out an investigation into his own party’s links to dubious organisations such as Ulster Resistance, before reaching the same conclusion as Mary Lou and deciding it’s best just to ignore it and move on.”

If McDonald and Dodds is a success, ITV are planning a number of similar shows featuring top local politicians.

“We’ve already made the pilot for a remake of Cagney and Lacey starring Arlene Foster and Michelle O’Neill and Ian Paisley Jr has agreed to audition for Hawaii Five-O,” says Christie.

“If we pay for the flights.”