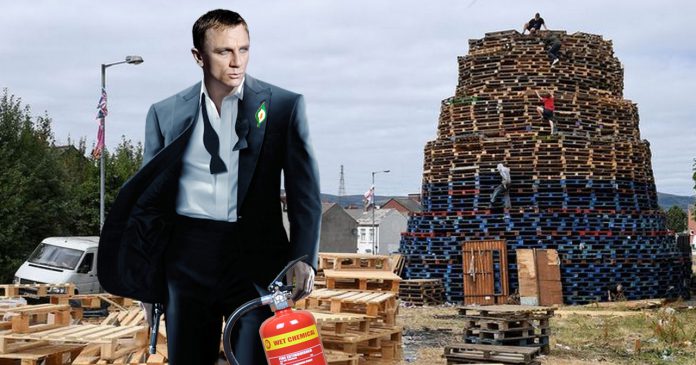 The release of the new James Bond film, ‘No Time To Die’ has actually been delayed due to controversy over plans to out him as an IRA double-agent secretly working towards a United Ireland, The Ulster Fry has learned.

“The plot twist blew my mind!” revealed Bond actor, Daniel Taig. “It wasn’t how I was expecting my final Bond outing to go… but once I got into character, I loved it.”

The story, which sees Bond race against the clock to stop a massive bonfire in East Belfast, has come under criticism from unionists and nationalists alike, causing delays.

“James Bond will never be accepted by republicans” said a Sinn Fein spokesman. “He’s already sworn an oath to the Queen. It’s outrageous to imply he’s been secretly working for us!”

“We’re disgusted they’ve given a British icon links to terrorism.” cried a DUP source. “Bond is loyal to the Queen! There will be protests City Hall over this!”

Bond producer Barbara Brocolli told us to expect some other big reveals.

“Fans will be thrilled to learn that whilst Bond enjoys the odd Martini, he actually prefers a nice pint of Harp and a packet of dates” she told us.

“He’ll still drive a fast car and get the girl” she reassured. “However in keeping with the tone, it’ll be a chipped Subaru and she’ll be a spray tanned millie with a couple of kids and a psycho ex”

The delays will allow the filming of an alternate Unionist-friendly Bond movie entitled, ‘Dr Says No’.