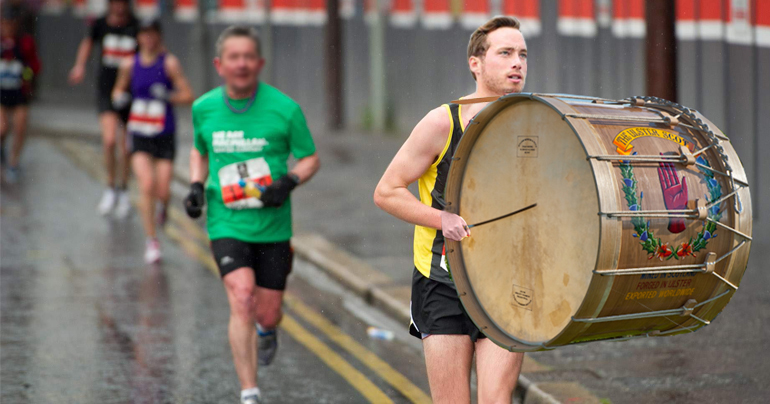 Today’s Belfast Marathon was sensationally hijacked by the local elections, after the country’s main political parties began rerouting runners to support their own agenda.

The furore began this morning at around 9.15am, as the first of the 17,000 runners made their way into West Belfast. Keen to drive home their United Ireland manifesto, Sinn Fein started the drama by re-directing many competitors off the Falls Road towards Monaghan, in an effort to make the race a cross-border event.

As word reached the nearby Shankill, the UUP wasted no time in putting their own stamp on the endurance race, quickly tasking an army of canvassers to redirect joggers on an alternative 26 mile ‘traditional route’ of Belfast, covering all the favourite marching roads and Twelfth flashpoints. Although less gruelling than Sinn Fein’s 68 mile trek to the border, it was much slower, as UUP race officials insisted that people walk the circuit – whilst carrying a massive drum.

In North Belfast the SDLP took a more liberal approach to the race, adding hundreds of local pensioners to the roster for free, whilst handing out cups of tea, blankets and home heating vouchers. However by the time the marathon reached the East the mood had soured, with DUP supporters aggressively distributing emergency pairs of trousers in protest at how ‘gay’ the competitors looked in their short-shorts.

Alliance, in an effort to keep everything inclusive, encouraged their supporters to join in on all the day’s activities, meaning that the more bipartisan competitors ran the full 162 mile ad-hoc circuit of todays Belfast Marathon.

“Jesus, I know Alliance wants to make Long popular in Belfast, but this is pure ripping the arse out of it” said exhausted running enthusiast Mark Cramp as he took a break at an SDLP tea-station.

“I’ve another 37 mile to go and I won’t complete the race until around 3am!” he lamented, before tightening his new trousers, picking up his Lambeg and walking slowly onwards.