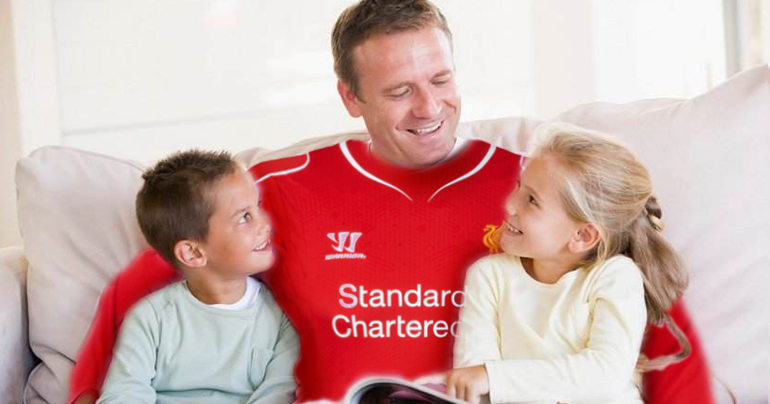 Avid football fanatic Fifa O’Donnell has spoken his ‘joy’ today, after being reunited with two long lost children whom his wife claims he hasn’t seen in almost 10 months.

“Auch it’s brilliant to see them!” said a tearful Fifa to local reporters. “Sorry I’m a bit emotional and overwhelmed obviously, what with Gerrard leaving and today’s pasting by Stoke. We’ve never really recovered from losing Suarez like. But seeing the wee-uns has cheered me up no end.”

Shortly later however the police were called to the scene, after O’Donnell took the wrong kids to the park – much to the alarm of his neighbours who reported them missing. Apologising, O’Donnell said that it was an ‘honest mixup’, after he found two children playing his front garden.

“Sure they grow up so fast and get that many new clothes, how could ye keep track?” he told Police. “Besides they still cost me £20 in ice-cream, sweets and magazines!”

O’Donnell has been unavailable for selection as a parent since August last year, following the start of 2014/2015 Premier League season – which sadly came to an end today. “Daddy has had to work weekends too, doesn’t he wee man?” speaking of his contractual obligations with Paddy Power, which renders his living room ‘out of bounds’ for children on Saturday and Sundays.

“That’s your daughter” replied his wife. “She got her hair cut weeks ago, remember?”

Continuing, O’Donnell assured his family “Ah sure that’s all in the past now. Daddy is back and he is gonna take his special wee angels out for ice-cream, to the cinema and the park every weekend now forever and ever…until the new season starts.”