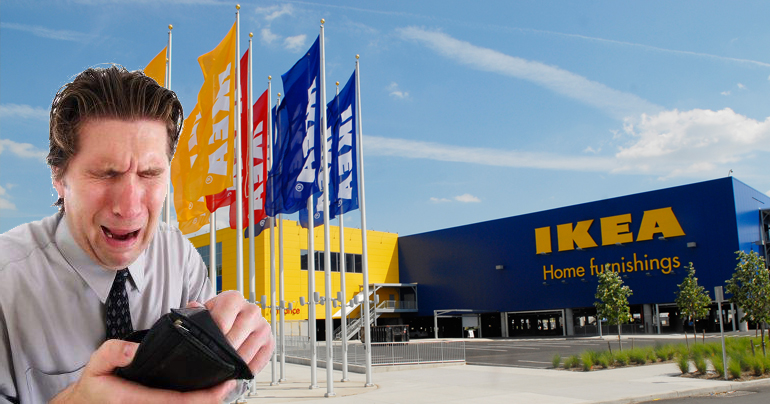 Following the jubilant scenes of joy and celebration amongst Irish gay couples yesterday, it was back to porridge for straight men today, after everyone’s wives & girlfriends unanimously decided that Sweden’s Eurovision win was ‘a good excuse to hit IKEA’.

Across the country right now, it is reported that thousands of men are slowly dying inside, as kids fight in the back of cars, people offer them a choice of fish or meatballs and their other half tries to write down unpronounceable Swedish words with a small stubby pencil.

“I don’t even remember what Sweden’s song goes like” said a despairing Alan Keys, when we caught up with him hiding out in the lighting department. “But apparently we now need a new coffee table, two pot plants, an orange plastic fruit-bowl, a weird green canvas storage box, two floating shelves and a canvas prints of the manhattan skyline.”

However this view was not shared by women shoppers, who remained upbeat and cheery at the prospect of spending two hours walking around a huge, cleverly designed impulse buying maze. “I just love Sweden and everything about it!” revealed local mother Vårgyllen McKeever. “I love ABBA, I love IKEA and I love… what was the name of the fella who won again last night? Aye him too. Sweden is class!”

“Look honey, these stripy cushions are only £4” she called to her partner finally.

However one man we spoke to seemed more philosophical about the experience. “I’ve driven here, I’ve eaten the f**king meatballs, I’ve pretended to be interested in whether a lime green rug will match our sofa. I’ll even build that f**king ziz-zag bookshelf and pay for all this shite” said a calm and measured Fifa O’Donnell.

“But my missus knows the rules. As long as we are home before the football kicks off and both her and them tiny people that always follow her about stay out of the living room and leave me the f**k along for two hours, it’ll all be grand!”

The winner of last night’s Eurovision, Hans Whatchimicallim, was unavailable for comment as his agent had already forgotten his phone number.