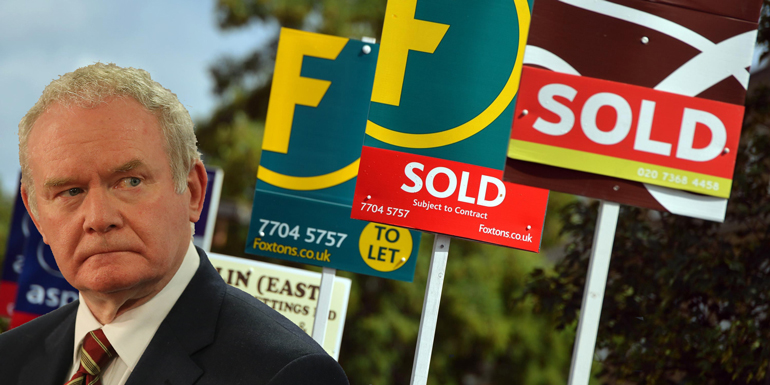 Deputy First Minister Martin McGuinness believes that undercover ‘estate agents’ may be threatening the sale process of his house.

Mr McGuinness told supporters, “I think serious questions have to be asked about the sale of my bungalow, particularly as we all know what happens when estate agents get involved. How can they justify charging 3% of the sale price? All they did was put up a sign and tell me to put flowers in the kitchen.”

Mr McGuinness has expressed similar concerns about the recent booking of lad’s holiday to Magaluf arranged by party colleague Niall Ó Donnghaile. “I told Niall to book all our flights and hotels on-line as we’d get a better deal, but it seems he didn’t follow orders. At this point I can’t rule out the involvement of travel agents.”

However the DUP have rejected Sinn Fein’s claims regarding the holiday arrangements of the Republican movement. “Whatever Martin says about travel agents it’s pretty obvious that the IRA hasn’t gone away anywhere recently,” argued Peter Robinson. “Far from it, they’ve been ‘staycationing’ for years, probably in caravan parks along the border.”

Meanwhile, in a bizarre twist, Gerry Kelly claims that a recent trip he had planned to Belfast Zoo had been sabotaged, “probably by the Brits.” The North Belfast MLA told the Ulster Fry that he had been driving along the M2 when he found his passage blocked by a huge marching herd. “I’ve recently adopted a Prairie Dog – they’re great little fellas, always escaping – and was on my way to see him, when suddenly my route was blocked by parading pachyderms.”

“I genuinely believe that sinister elephants may have been at work here.”