Everyone in Ireland now Gay, after “most fabulous week ever” 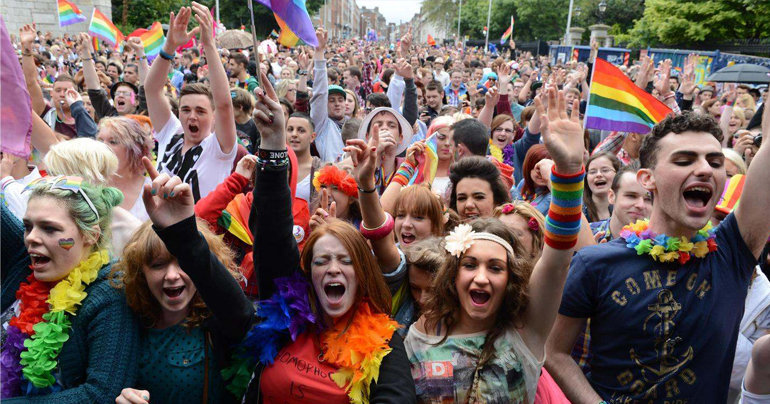 A survey released today by the United Nations has concluded that the entire population of the island of Ireland ‘is now Gay’, after a week described as ‘fabulous’ by onlookers.

“This week has seen the alignment of three distinct events,” said top UN boffin Arnold Flunk, “first we had the Asher’s ‘Gay Cake’ case in the North, then the same sex marriage referendum in the Republic and then, of course, tonight’s Eurovision song contest. This potent combination of very Gay things is set to push everyone over the edge!”

“I couldn’t agree more,” said Deirdre O’Connor, a 78 year old Grandmother from Cork. “I woke up the morning after the referendum and decided that I was going to have a Gay marriage.” Luckily her husband Francis was in full agreement. “Mad for the boys now, so I am,” he told us, “though so would you be if you were married to this one for the last 54 years.” Francis admits he was a little concerned about coming out to his friends at the bowling club, “but it turns out they’d all gone Gay as well.”

In Northern Ireland we expected to hear vehement condemnation from the Free Presbyterian Church, and contacted well known Nolan talking-head the Rev David McIlspleen for his thoughts. “This is a shocking development,” he claimed, “a shockingly fabulous development sweetie! However I’m afraid I don’t have time to discuss it with you as I’ve some friends from the Free Presbyterian LGBT group coming round to listen to my new Erasure CDs.”

The Catholic church has also embraced its previously well hidden Gay side. “I was OK til this morning,” said Bishop Finbar Saunders, from the Ring of Kerry diocese. “I was fine through the two Eurovision semis, but when I saw the trailer for tonight’s grand final I lost the run of myself and went on one of those Gay chat things. Half the seminary was on it, though I understand that’s nothing new.”

Not everyone is pleased about the developments. Belfast Gay rights activist Jamie Brightsun told us that he’d witnessed “tears and anger” in some quarters. “I’ve had people telling me they’re going to leave the country, people who can’t stick the thought of being surrounded by all these new Gay folk all the time.” he said, “I mean, we were all Gay before it was fashionable.”