MLAs to watch cartoons until the summer recess 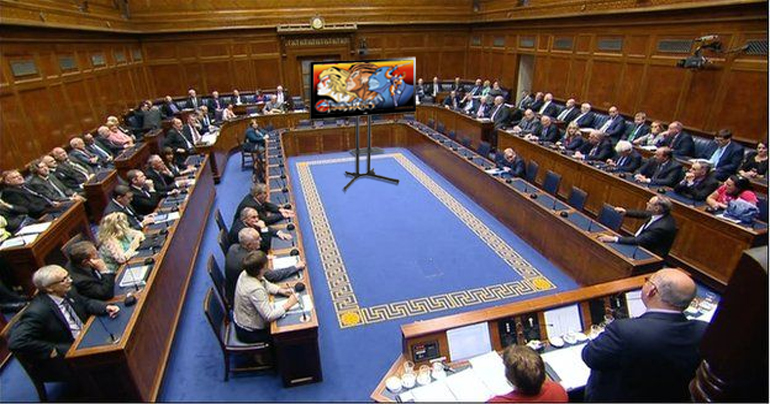 With a new Executive in place, Northern Ireland’s MLAs are to spend the next month watching DVDs until their summer holidays start, The Ulster Fry has learned.

After a short debate about what to show, Stormont caretaker Mr Chambers wheeled the big TV on the trolley into the assembly chamber, and everyone settled down for cartoon time. We understand that a DUP motion to watch Thundercats first was passed unanimously, after they agreed to an Alliance amendment to have Spongebob Squarepants tomorrow.

“We’ve worked hard all year and everyone deserves a break,” we were told by Martin McGuinness “To be honest if we did any work around now we’d have forgotten it all by September, so there’s no point really.”

The exhausted politicians have a few other ideas lined up to help them relax. “Stormont’s a big place,” new Economy Minister Simon Hamilton explained. “Me and Paul Givan are bringing our bikes in and we’re going to practice our wheelies and stuff. I’ve only got a Grifter but Paul’s got a Raleigh Burner so I hope he lets me have a go on his trick nuts.”

We caught up with Green Party leader Steven Agnew and his friend Jim Allister at the Mo Mowlam playground. “It’s ace down here, there’s loads of swings and some of them have the wee safety harnesses so I can have a go on them,” revealed Mr Agnew, “I’m going on the rope slide next.”

“That’s if you’re tall enough for it,” laughed Jim, as he rocked back and forth on a spring-loaded bumble bee.

“Don’t worry, we’ll all be back to work in the Autumn term,” First Minister Arlene Foster said later. “At least until November, then we’ll start rehearsing for the Christmas Nativity Crisis.”