Mr Taytos to do battle on Frampton undercard 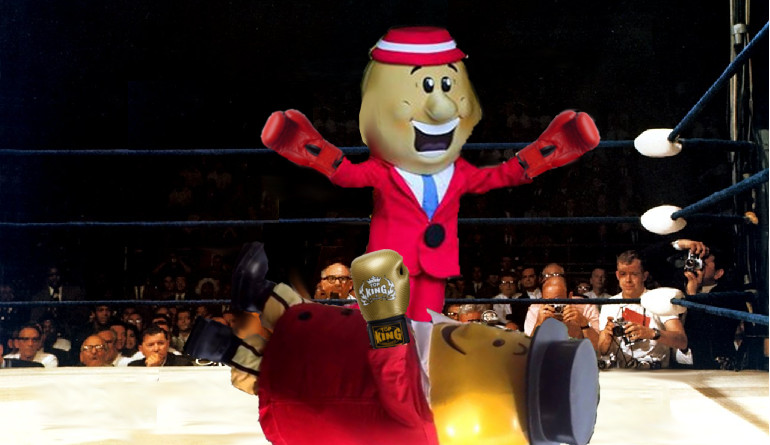 As Belfast prepares for the Carl Frampton fight against Chris Avalos tonight, promoter Barry McGuigan has announced a major addition to the spectacle. “We’ve got the Tandragee Mr Tayto up against Dublin’s Mr Tayto,” said the former world champion, “in what is sure to be a hard fought contest.”

“The potato-weight championship of all Ireland is at stake for these two well seasoned competitors,” McGuigan told the Ulster Fry. “In many ways it is the fight we’ve all been waiting for, to be honest I’m a bit worried that it might overshadow Frampton’s own bout.”

The grudge match is guaranteed to interest boxing fans, as the two rivals had exchanged cross border blows for decades before reaching an uneasy peace in recent years. “That ended when down south Mr Tayto upped the ante and opened that theme park,” says McGuigan, “Northern Ireland Mr Tayto felt fairly secure in his castle up to that point, but if you’ve got a theme park? The sky’s the limit.”

Each fighter will don the colours of his best selling flavour, with the Co Armagh competitor in his traditional yellow versus the Dublin spud’s politically suspect red, white and blue cheese and onion branding. “The crowd will love it,” claims McGuigan, “most of them will be blocked and watching two giant potatoes punching each other will make perfect sense.”

The winner of the bout will pick up a multi-pack purse containing bags weighing substantially less than individual packets, before going on to fight Gary Lineker for the the world title.