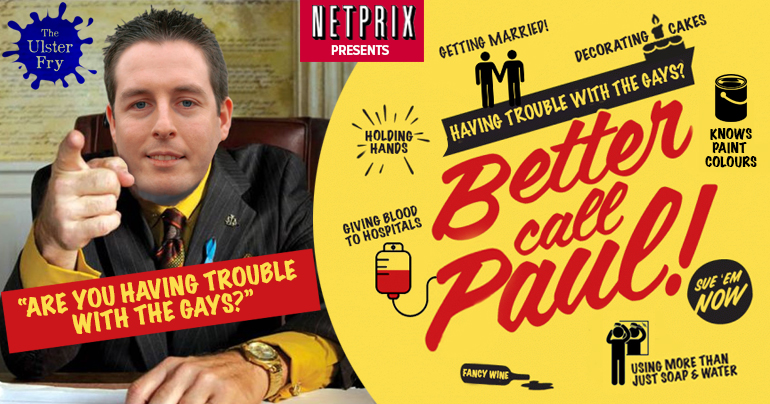 In the midst of the continuing drama surrounding the ‘Gay Cake’ saga, DUP MLA Paul Givan is on course for a sensational move into full-time acting and is set to star in his own primetime TV show.

His new series, ‘Better Call Paul’, follows down-at-heel lawyer Paul Badman in an eternal struggle against “the Gay mafia”, and his quest to make a controversial “Unconscious Clause” become part of the Northern Irish legal framework.

“In the opening episode we learn how the young Paul was forced to bake cakes for the band Right Said Fred, something that went against his deeply held religious beliefs,” says show producer Richard Throb, “as well as most people’s musical taste. This deeply unsettles Paul, and he vows that he’ll devote his life to standing up for the disenfranchised majority Christian community.”

As well as starring in the show, Mr Givan is also credited as the main scriptwriter, in a dual role that he is taking very seriously. “I want to show the world that without this Clause there’ll be Gays and Lesbians running all round the place flaunting themselves, dangling their sexuality in front of old people, rubbing up against us in shopping centres and trying to corrupt our pets.”

Details of the debut season are still under wraps, but the major story arc is rumoured to have season one’s evil antagonists, Elton John and Louis Spence, running for First and Deputy First Minister, in a dystopian political satire that Paul says will ‘insert the fear of God into God fearin’ people’.

Paul and his colleagues will spend the first season foiling the pair’s flamboyant election hopes using ‘really clever passages’ from the Bible, whilst also pouring cold water on their joint-manifesto that everything in our new shared society will be ‘fabulous’ – when in reality it will be ‘a bit shite.’

“Paul’s concerns increase even further when people begin using his own law against him,” says assistant producer Jay Y Kelly, “and he finds himself unable to buy Christmas decorations in a shop staffed mainly by people with strongly held non-Christian faiths.”

“Viewers will have to wait until season two to find out if he can conjure up another ridiculous law to make sure Christmas isn’t cancelled, and if he gets his hands on a big set of shiny balls.”