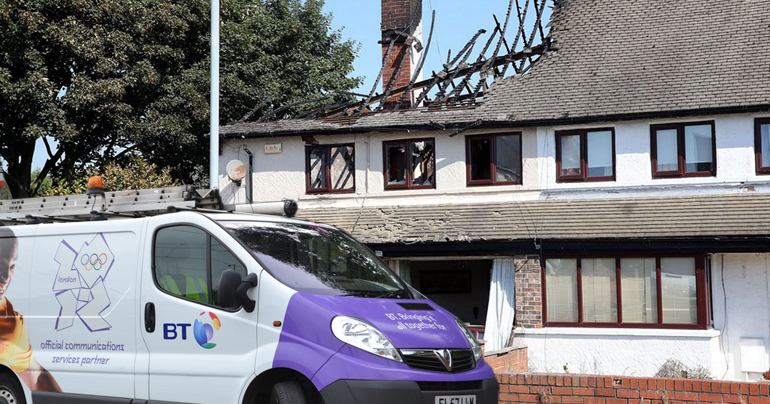 British Telecom have admitted that hundreds of homes in Northern Ireland have been mistakenly rigged with explosives, after a typo-riddled email instructed their engineers to ‘install landmines’ at properties across the Province.

Diesel McCartney a 47 year old tyre-kicker from Aughnacloy, discovered the issue on Tuesday when he went to call his mum, only to find himself wedged between the rafters of his house, crying out for her instead. Speaking to us from Tyrone International Medical Centre. Mr McCartney told us that he was ‘shaken but lucky to be alive’ after surgeons worked around the clock to remove several massive splinters from his arse.

The concerns were echoed by the Kennedy family in Broughshane, after their new conservatory was blown to smithereens following a broadband upgrade.  “We ordered that BT ‘Infinity’ package, but to be honest we only got to use it for like a day or two before it blew up. It’s a total con!” said youngest son Stuart. “My mum is devastated. The latest episode of Homeland only got to 37% downloaded when we got cut off.”

Reports of explosions continue to flood in from across the country about the issue, with many left wondering how such a catastrophic mixup happened. “I was after free evening and weekend calls but instead I ended up with a dead dog and a hole in the garden!” moaned Newry customer Shiraz O’Neill.

The telecoms giant attempted to diffuse the situation by saying that it was an ‘honest mixup’ – and that their engineers would be revisiting properties next week to replace the claymores with harmless landlines instead.

BT later attempted to set up a special hotline to deal with customer queries, but a further administrative error saw the establishment of a “hitline”. Several customers have now been assassinated.