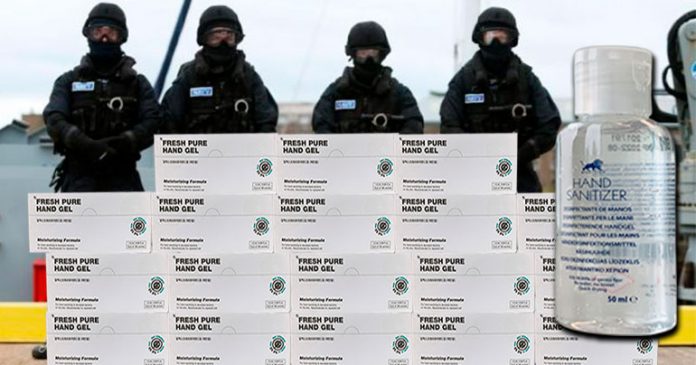 The spiralling cost of hand sanitizing products caused by the Corona Virus outbreak has led to organised criminals muscling in on the trade, law enforcement officials have warned.

The revelation comes after a combined task force from the Royal and Irish navies seized two tonnes of hand gel on a Colombian registered vessel north of Co. Donegal.

“The Cartels are refining huge quantities of this stuff,” says Commodore Rick Steefore from the Royal Navy. “If this shipment had reached the UK market, it would have had a street value running into millions of pounds.”

Inspector Bobby Singlethong from the PSNI’s drug enforcement branch told us that hand-gel smuggling was not a victimless crime.

“This is not a victimless crime,” he said. “We’re beginning to find used bottles of hand gels around playgrounds. Any child could pick these up and and accidentally sanitize themselves.”

We spoke to one addict who confirmed how easy it was to become hooked on the gels.

“I started off on the soft stuff,” he told us, “Ye know, Pears Soap, or Matey Bubble Bath, but pretty soon I was washing my hands 10, maybe 15 times a day.”

“Soon that wasn’t enough, I needed the quick hit from one of these alcohol gels. Next thing I knew, I was holding up Chemist shops, just to get my next fix.”

“When I say ‘holding up’, I mean I was blocking aisles by taking a long time choosing which one I wanted, but it was still pretty bad I’ll tell ye.”

In light of the news, the PSNI have warned the public not to buy the gels from unusual sources.

“We don’t want this stuff to end up on the wrong hands,” says Singlethong.