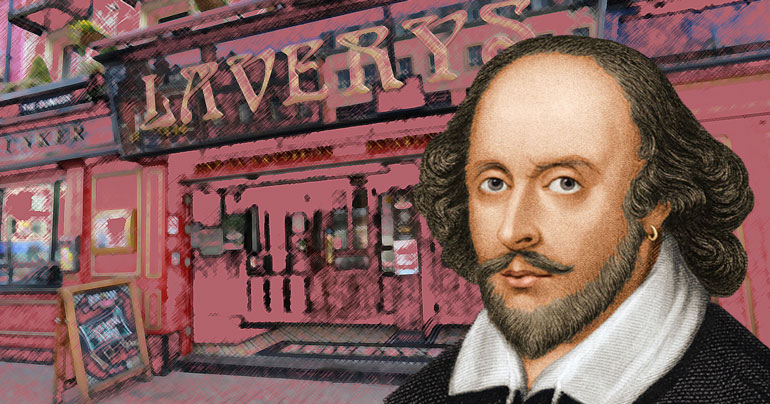 ‘Shall I compare thee to a sausage roll? Thou art more beautiful at room temperature’

As the world marks the 400th anniversary of William Shakespeare’s death, historians have remarkably discovered he was originally from Northern Ireland.

“Aye we found a rake of unseen first drafts he’d just left lying at his arse in the loft of his old house in Stratford-upon-Avon” revealed Richard MacLear from the Shakespeare Trust. “That was the first major clue.  The next was that they were just bucked into a Family Circle biscuit tin!”

Shakespeare, it transpires, grew up outside Belfast, only moving to England because he couldn’t find work. “The only writers making money in Norn Iron back then were the Ye Olde Hollow In The Wall Troupe,” explains MacLear. “He sent the BBC several of his early works, including the bonfire-based work, ‘Eleventh Night’, and his dole comedy-tragedy, ‘Doin Fack All About Nahhin’, but they never bothered their hole responding.”

“Eventually he cracked the bap and took the ferry to Troon.”

“Many of his earliest drafts were heavily influenced by life in Northern Ireland,” continued MacLear as he leafed through the pages. “Passages such as ‘2b, or not 2b? Which bus goes up the Fairview Road?’, ‘Is this a Jagerbomb I see before me?’ and ‘Romeo, Romeo! Wheredafuq did that wee bastard Romeo git de?’, all highlight Shakespeare’s early struggle with language before adapting his works to the English audience.”

Other famous quotes he changed include, ‘Once more unto Crawfordsburn Beach dear friends’, ‘Where are the winter fuel payments of our discontent?’ and ‘Beware the Spides of Marching season’.

However it is this passage, from the first draft of Julius Caesar, which leaves us in no doubt.