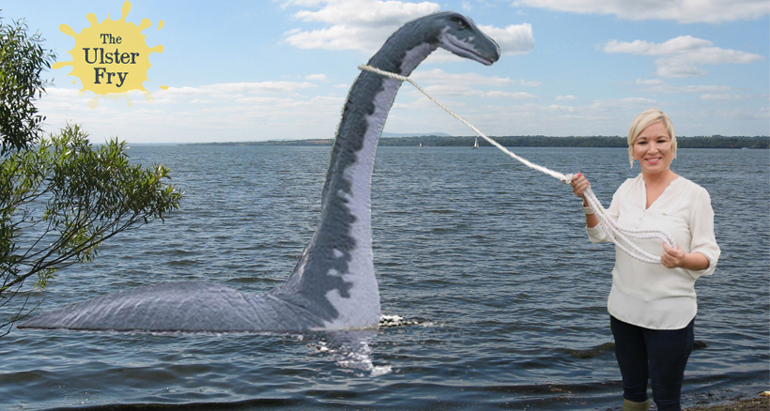 Sinn Fein have announced a ‘monster proposal’ at the party’s Ard Fheis in Dublin – one they claim will be a major boost to visitor numbers across the island of Ireland.

According to the party the presence of the Loch Ness Monster in Scotland attracts millions in tourist spend every year and, they claim, Lough Neagh is the ideal location for a similar creature.

Deputy leader Martin McGuinness outlined the plan this morning. “For too long the Brits have had control of the monster related tourism industry on these islands,” he told delegates. “The addition of a pre-historic aquatic beast to the Irish water network will bring visitors flocking in their thousands.”

The party say they’ve sourced such an animal in China, and have had it flown to a secret location outside Toome. Outgoing agriculture minister Michelle O’Neill has already posed for photos with “Neaghssie” and rejects criticism that keeping it in food will prove too expensive.

“Sinn Fein are committed to providing value for money in public services,” she said. “To that end we’ve just voted to replace all the road signs in the six counties with ones use kilometres instead of miles. We’ll use the money from scrapping all the old ones to pay for monster food. You know it makes economic sense.”

The move has certainly raised some questions for the DUP. “We should probably lodge a petition of concern on this one,” said a spokesman, “but then many in our party don’t believe in dinosaurs in the first place, so it hard to vote against something that doesn’t exist.”

However the DUP’s position of not believing in stuff more than 4,000 years old is currently under review,  after a party member pointed out this means they can no longer could believe in many their own policies.