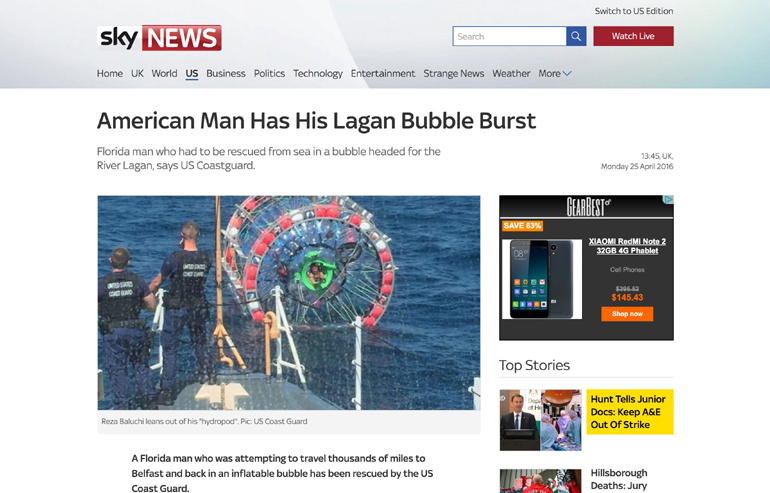 An American daredevil found floating in an inflatable bubble off the coast of Florida may have been trying to get to Northern Ireland, the Ulster Fry has learned.

Like every other American, Reza Baluchi claims to have Irish ancestry and has always wanted to be the first person to actually come up the Lagan in a bubble. He’d put this dream right to the top of his bucket list of things to do before he dies, without actually considering that it might be the cause of his death.

However Mr Baluchi’s attempt to “run” from Florida to Belfast was cut short when the Coastguard towed him back to land – for the second time.

Earlier this month, the Coastguard had ordered Baluchi not to depart “because your vessel and the conditions under which you are attempting to complete your voyage to Belfast are unsafe.”

Baluchi appears to have ignored these concerns, posting a blunt message on his Facebook saying that them that they could “stick their warnings up their holes”.

This is not the first time that Baluchi has attempted such a journey. In 2014, the Coastguard rescued him after receiving a report about a disoriented man floating in a bubble off the coast of Miami, mumbling incoherently about getting to the Bann or the Foyle.

The rescue operation is estimated to have cost the US Coastguard one million dollars. Baluchi has proven his Irish ancestry by claiming to be skint and offered to pay it back at a fiver a week from his bru.