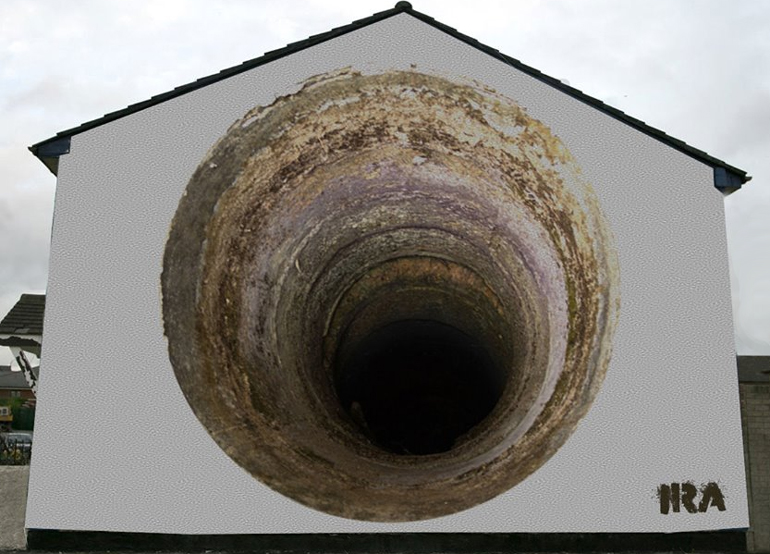 Dissident Republicans today unveiled a new propaganda mural showing their vision of the future – a bottomless black hole of misery.

Painted on the side of a chip shop in the Bogside, the artwork “represents all that the dissident movement can offer the people of Ireland,” we were told by their representative, Fiachra O’Fuchstiych.

“We want to ensure that today’s children get to grow up with the same sense of hopelessness as those born in the 70s and 80s,” continued the aspiring MLA – who managed to get 12 votes in the last assembly election, 7 of them from himself. “This mural will serve as a beacon of shite for kids in the area, particularly when we whip them into rioting mode in the summer.”

The unveiling comes amid a renewed campaign by the multi-named Dissident movement. “Brexit is a real opportunity for Irish unity,” said Mr O’Fuchstiych, “so we’re encouraging our neighbours to support that plan that by getting kids to throw petrol bombs at them.”

When it was suggested to Mr O’Fuchstiych that there was very little support for this campaign, north or south of the border, he explained that this wasn’t important. “We don’t have to win any votes,” he told us, “we just have to keep the hate going long enough for the rest of yis to join in. Soon it’ll be 1973 all over again, but with better haircuts.”

“We will not stop until we realise our objectives” he explained, “and we will not realise what those objectives are until we find the bit of paper they were written on.”

“It’s around here somewhere,” he continued, as he fumbled through some old documents his Da left him, “knowing my luck the auld bastard wrote them in f**king Irish.”