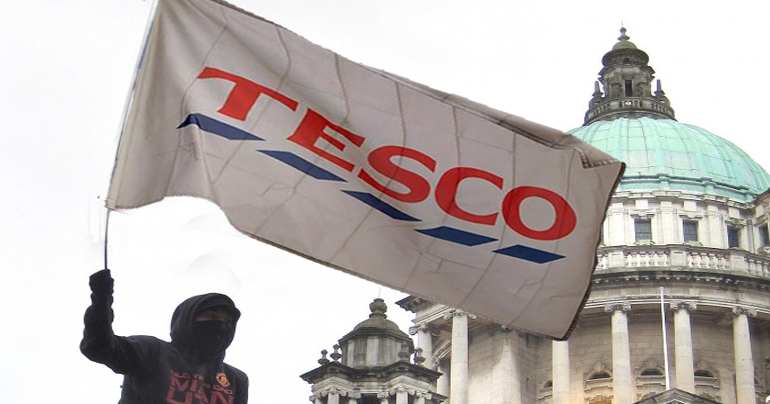 Attempts to broker a Programme for Government at Stormont are in crisis again, after a Sinn Fein statement condemned what they describe as “the increasingly sectarian nature of shared shopping spaces”.

“Our streets and retail parks are increasingly awash with unionist symbolism,” said the party’s North Belfast MLA, Irma Fended. “Both Sainsburys and Tesco are bedecked in Loyalist colours, the former a brazen orange, the latter, red, white and blue. Only Asda have used green to reach out to the Republican community.”

“Add to this the colour schemes of Halfords, B&Q and Argos, and you soon see that a simple shopping expedition becomes like a trip down the Shankill over the Twelfth. Then these so called ‘shops’ have the audacity to ask us to sign up to ‘loyalty cards’!!”

“This is bollocks,” we were told by the DUP’s Eric Rant. “Marks and Spencer use green on their stores, and Subway’s logo is plainly based on an Irish Tricolour. Even Toys R Us use 2 green letters and only one orange. Where’s the parity of esteem in that?”

“Inside the stores it’s even worse,” he continued. “When was the last time you saw a Londondairy section? Not to mention the blatant Gay propaganda that allows shoppers to purchase Fruit Corners, but not Straight Corners.”

Other politicians have waded in to the row, advising their supporters only to shop in stores which carry their party colours. People before Profit have urged voters to get behind the red flags of Supervalu and Spar, Alliance are backing the yellow lettering of Centra while the Greens favour the “nice lime shade” of the Co-op.

As a result of the deepening row it is understood that the Executive has already broken down and the Troubles are to restart on Friday.