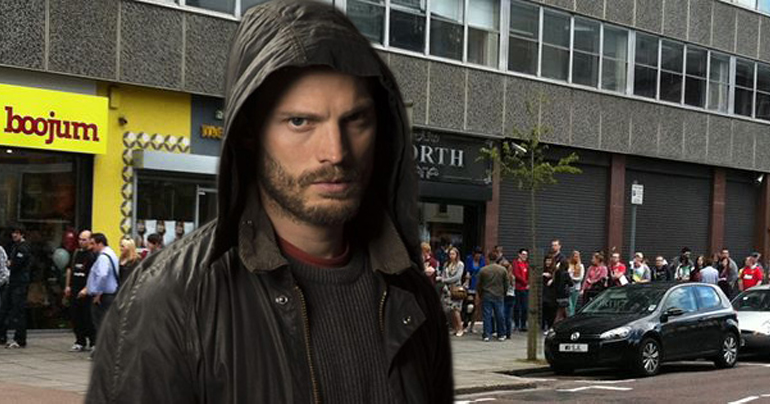 Writers of hit Belfast TV show ‘The Fall’ have upped the gritty realism of the locally-set psychological thriller, by confirming that Jamie Dornan’s serial killer, Paul Spector, will spend an entire episode of the show, waiting patiently in a ridiculously long queue for a burrito.

The BBC, who have come under criticism of late for portraying Belfast as an unnecessarily sinister and dark place, today released details of the episode, confirming that Ulster’s favourite dreamboat psychopath will take a much needed break from brutally killing women, to routinely queue alongside a procession of other bearded men – before viciously attacking a burrito.

Writers confirmed that Spector will also spot his next victim in the popular themed restaurant, but will be cruelly unable to follow her, as he’ll be too anxious about losing his place in the never-ending procession of burrito addicts.

‘We wanted to give fans around the world a real taste of Belfast’ said the shows principle scriptwriter, Tangent O’Neill. ‘Which as everyone knows, is Mexican!’

‘Spector has returned to the city against his better judgement. He’s back at work, back preying on women, and trying to put his family back together. All whilst the police close in on him. These are tough, challenging times for him.’

‘However, to further compound his frustrations, he only gets an 45 minutes for his lunch break, so we wanted to explore the tension of this drama with our viewers.’

Audiences are expected to be on the edge of their seat during the gripping queue-based episode, as the tension of getting served, eating a burrito the size of a used nappy, and getting back to his desk on time builds to a climax.

The new season of the show began on BBC 1 again recently, prompting women across the Province to experience a huge wave of mixed emotions, as they hid behind/humped pillows in fear/delight, whilst watching evil/gorgeous psychopath/hunk, Jamie Dornan, brutally murder/feel-up a string of unlucky/lucky women.

The Fall continues on BBC1 on Thursday.