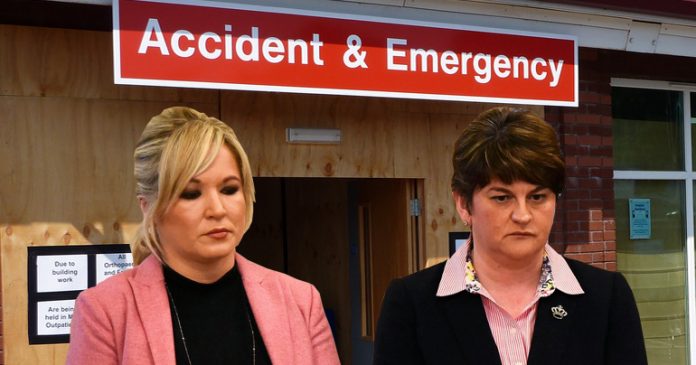 Northern Ireland’s politicians are to get a dose of reality when the next talks session gets underway, with a proposal to jam them all into a corner in an over-crowded A&E waiting room until they can come to some kind of agreement.

According to reports over Christmas there had been plans to whisk them off to a luxury hotel, in the hope that a round or two of golf and a couple of spa sessions might break the log-jam. However these have been shelved amid fears that they might get a bit too comfortable.

“Basically we hope that forcing them to face the grim realities of our over-stretched health service might somehow persuade them to get off their arses and actually do what they’re paid for,” said our Stormont source. “It’s unlikely we know, as it would involve them actually thinking about people other than their hard-line “core voters” for a change, but we have to try.”

One problem facing the idea is that hospitals here are now so full that there may not actually be space for the talks in any of the waiting areas.

“If they’re held here, we’ll have to erect some kind of tent for them in the car-park,” said Dr Will C U Later from the Ulster Hospital. “It’ll have to be squeezed in beside the ones we’re putting up for all the extra patients mind you.”

“That said, an Accident & Emergency Department seems to be the perfect place for these talks,” he continued. “After all, our politicians are experts in causing both.”