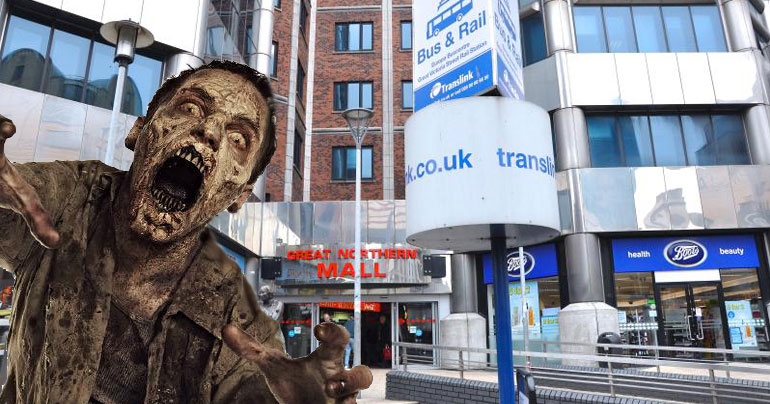 After several gritty seasons scavenging for survival in the backwater slums of mid-America, producers of hit TV show The Walking Dead have decided it’s time for a change and are set to move the entire production to Northern Ireland.

Heartened by the success of Game of Thrones, AMC have scoured Ulster for suitably dreary locations for the apocalyptic thriller, and reportedly got ‘dead excited’ by the desolate bleakness of the Great Northern Shopping Mall and adjoining Translink terminals.

The Ulster Fry understands that when the show returns in Autumn, Rick & Co will initially be holed up in the nearby Spires Mall. Despite being zombie-free and totally secure, the group will be forced to seek refuge elsewhere, after everyone tells Rick that the unnecessarily loud hourly ringing of their massive church bell is ‘doing their head in’. “It’s supposed to be a f**king Shopping Centre.” says Daryl in a tense stand-off with the leader.

In their toughest challenge yet, the group will make their way up Great Victoria Street, where they will face an army of Anti-Abortion Campaigners – who are aggressively looking for petitions signed, before being savagely hounded to go on a ‘bus-tour’ by dead-eyed monsters in bright red coats. It is understood all-but-one of the group eventually makes it to the Europa side-entrance, when after fighting off a horde of eager black taxi drivers, one unidentified lead cast member will be dragged into the Grand Opera House for a career-killing three-month stint in Pantomime. “It’s horrific” said a source.

Cannibalism is another recurring major theme this year too, as despite the terminal having lots of food, everyone decides they would rather eat each other than face an eternity of having pre-packed sandwiches, beef McCoys and bottles of Oasis in a bus station. “I’ve done my time at university Rick. I’m not going back to living like that!” shouts an impassioned Glenn, shortly before eating someone.

Filming for the season will begin shortly, with AMC reportedly ‘delighted’ by Translink’s offer to supply free zombie extras. “Aye we just told them to film in the early mornings when Civil Servants and office workers are begrudgingly shuffling into work.” said Translink boss George 8A Romero.

“Trust me, you won’t be able to tell the difference” he added.