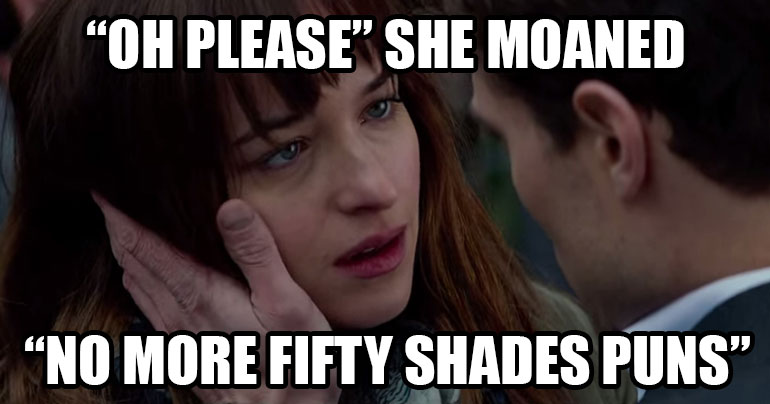 Following months of memes, rhymes and hilarious fake movie posters, the Dungiven Institute of Linguistics has confirmed that every possible pun combination for the term ‘Fifty Shades of Grey’ has now been discovered and posted online.

“After downloading the entire internet onto a floppy disk and running it through our systems for analysis, we’ve come to the conclusion that there are no longer any jokes left to make on the topic!” said lead analyst, Fractal McCauley.

Industry experts have long warned that Shades puns would eventually run out – leaving online humour creators with nothing to joke about for generations. This situation has dramatically escalated in recent weeks, following the hype surrounding the release of the movie – which has lead to a huge surge in silly pun making.

McCauley continued “First the Fermanagh Farm Feeds Federation did ‘Fifty Sheds of Grain’, then a butchers in Derry ran a ‘Fifty Shades of Gravy’ competition. Before we knew it, the Irish Rugby team were cracking ’Fifty Shades of Green’ jokes – and then it all got out of hand.  Sadly, we’ve now reached the end.”

“Our ‘Fifty RAIDS of Cray’ super-computer secured the last ever combination as it’s new nickname as it finished it’s analysis” said McCauley. “and even then it’s pure geeky and only nerds will get it!”

The claims were disputed by LGBT joggers group ‘Fifty Legs of Gay’ however, who claim that the joke has ‘plenty of mileage left in it yet’.

These sentiments were echoed by Republic of Ireland’s former goalkeeper, who’s new career highlights DVD, ‘Fifty Saves of Shay’ is out on Friday.