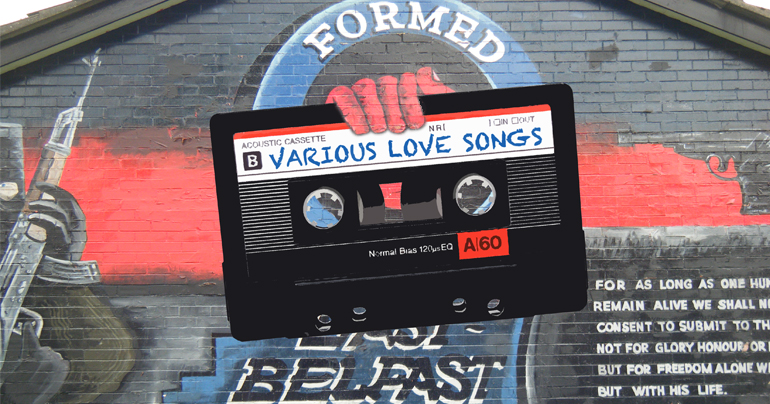 With the country still recovering from Valentines Day, former loyalist paramilitary leaders are said to be ‘extremely nervous’ today, with the news that an old cassette tape they made decades ago could soon be revealed to the public.

The mixtape, which was recorded at height of the 90s chart conflict between Bryan Adams and Whitney Houston, is said to contain several ‘guilty pleasure’ confessions from high profile Loyalists, including Haddaway’s ‘What is Love?’, Shania Twain’s ‘You’re Still The One’ and ‘Kiss Me’ by Sixpence None The Richer.

In a further embarrassing turn of events, the two PSNI detectives who travelled to Boston College to collect the recording are said to have found ‘definite evidence of tampering’. A closer inspection found ‘wee balls of paper’ stuffed into the tape’s ‘record holes’ – that had been haphazardly secured by bits of sellotape. “It was like something from an old episode of MacGyver!” said officer Richard Dean Anderson of the PSNI Retro Crimes Division.

As a result, investigators now suspect that all 43 tracks on the tape were illegally recorded straight from BBC Radio One’s ‘Top 40 Countdown’ some years ago, in a home-made recording that music industry professionals have called ‘a complete hatchet job’

The full track listing is still to be revealed publicly, but a PSNI source revealed that multiple recordings of the same song scattered throughout the tape – ‘Nobody Know It But Me’ by the Tony Rich Project, have led officers to believe this was a ‘dark time’ for Ulster loyalists.

With the further discovery of ‘Unchained Melody’ by Robson & Jerome, officers are now keen to speak to former Red Hand Commando leader Winston Rea, after several cover versions of classic love songs were uncovered, that detectives say have also been ‘brutally murdered’.

The PSNI denied rumours that their cassette case was already unravelling, assuring the public it was just a ‘wind up by a pencil pusher’.