NI politicians celebrate the 1st birthday of their free wages 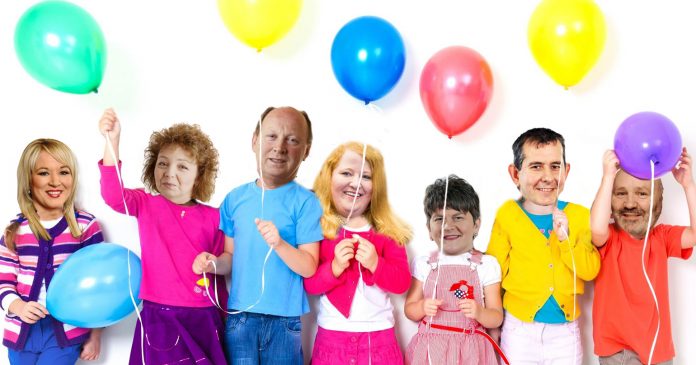 Northern Irish politicians made an rare appearance at Stormont today to attend the 1st birthday party of getting paid for doing nothing, the Ulster Fry has learned.

“My mammy is coming back for me at three o clock,” squealed an excited Arlene Foster as she ran up the hill. “I’m going to have so much fun with all my bestest friends, Edwin and Paul and wee Mervyn… who I have not seen in ages and ages and ages!”

“But not Jonny Bellend,” she added, blowing a raspberry. “He’s a big smelly bum! We don’t play with him anymore”

However inside the party, not everything went to plan.

“We can’t blow the candle out!!” sobbed Michelle O’Neill after they finished singing Happy Birthday to themselves. “Naomi Long brought the stupid cake… so instead of a normal wee thin stripey candle, it’s a posh Pomegranate & Lavender Yankee one, inside a glass jar… with a lid.”

“The DUP are totally spoiling musical chairs!!!!” huffed a teary eyed Gerry Kelly as Edwin Poots and Paul Givan marched around him in circles giggling. “You’re meant to stop walking when the music stops, not keep going until you reach a field!”

The DUP contingent were similarly irritated. “Themuns have been battering that Piñata for ages now,” said Christopher Stalford. “Anyone would think it was a tout or something.”

However both sides laughed off suggestions that their new teacher Mrs Bradley would put an end to their party.

“We’ll just treat her like all the other substitutes that the Headmistress sends over to look after us, and do no work till she goes home crying,” said Alex Maskey.