“No Border Poll in my lifetime,” says woman who thought Brexit would secure the Union 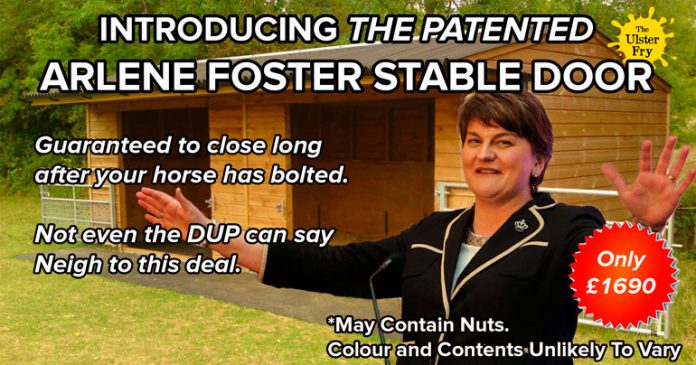 Arlene Foster has once again revealed her psychic powers by announcing that she believes there was no chance of a border poll in her lifetime.

Mrs Foster told the BBC that there were more important things than discussing the silly fripperies like the border, despite leading a party dedicated to retaining it.

“It’s nonsense,” she might have said. “All our hard work over the last three years has strengthened our position in the UK.”

“Everyone loves Brexit here, if you look right across Northern Ireland you’ll see people dancing in the streets in celebration, Nationalist and Unionist alike.”

“Why would even think about the dangerous waters of a United Ireland, when we’ve the certainty and security of Brexit to look forward to?”

Sinn Fein, meanwhile, have poured scorn on her statement, with party President Mary Lou McDonald saying a United Ireland was closer than ever.

“There’ll be a border poll within the next 5 years,” she told us. “Unionists are queuing up to join the Republican movement, it seems all that ‘Up the Ra’ stuff during the last election went down a storm with them.”

Following their pronouncements, the two leaders were ushered into a side room in Stormont where they both successfully chose next week’s winning lottery numbers, the winner of the Grand National and reached agreement that Manchester United would be crowned Premier League champions in May.