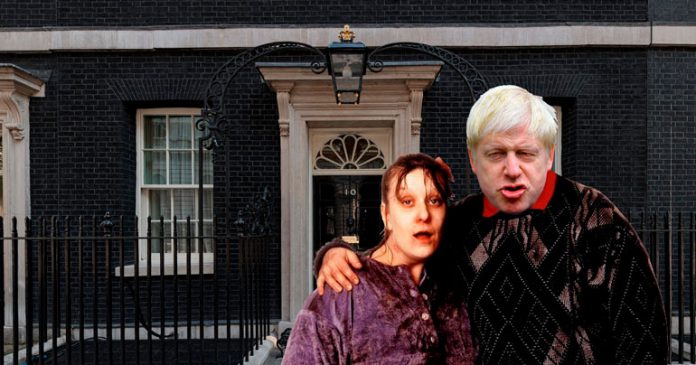 Serial father Boris Johnson has told journalists that he and his partner Carrie are hoping the impending birth of their child will increase their chances of getting a council house.

“We’re living in a one bedroom flat in Downing Street at the minute,” he revealed. “Hopefully this new baby will push us up the housing list and we can get something bigger.”

Surprisingly, the couple are hoping to relocate to Northern Ireland.

“We’re a bit fed up with London and fancy moving somewhere with more murals,” Mr Johnson explained. “I was hoping for Rathcoole, but Carrie’s had her eye on a semi in the West Winds Estate in Newtownards for a while.”

“It’s right and handy to Ards Shopping Centre, and that’s got a B&M Bargains and a TK Max, so we’ll be able to kit the place out for next to nothing.”

This is believed to be Mr Johnson’s sixth child, making him the first UK Prime Minister to be able to claim more than £300 a week in Child Benefit, a fact which seemed to surprise him.

“Is that all?” he asked. “How are you meant to pay for six weans on that?”

“I’ll tell you one thing, you can expect that to change in the next budget. Get the Chancellor of the Exchequer on the phone…..”

In a completely unrelated story, the announcement coincided with a row over the resignation of a senior civil servant.

“Move along now, nothing to see here. Have I told you about my new baby?” said the Prime Minister.