“Nobody has a f**king clue how this election count works”, admits Electoral Office 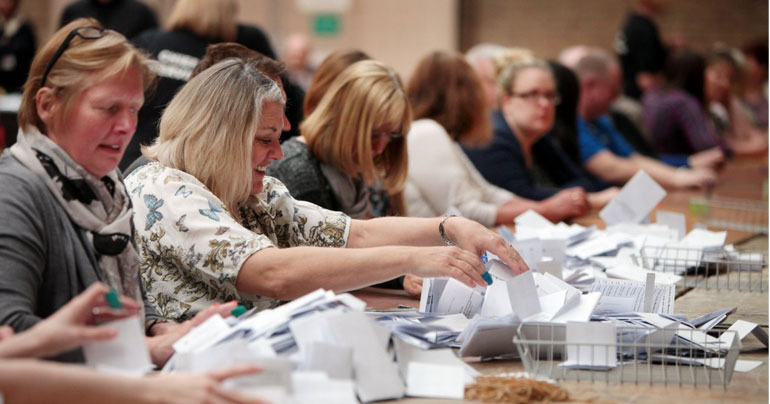 The whole STV voting system is a complete load of bollocks, election officials have revealed.

STV, which stands for something people have forgotten, was originally introduced here to stop bigots taking power. Sadly that has failed and now no one has a clue what’s going on.

“We’ve had folk counting all day and all we’ve done is manage to get about two dozen people across the line,” admitted Deputy Chief Electoral Officer Pauline Booth. “Now we’re all just standing around looking at each other trying to guess what happens next.”

According to elections expert Votey McVoteface, you’re supposed to count up all the votes then start doing sums. “It’s quite simple really, you have first preferences which you give to the person you like most, then you go down the list until you get to wankers,” he explained.

“After we count up the first preferences we start adding up all the other numbers, then divide that total by 6, then multiply by 23,” he continued. “If you still aren’t sure you hold an egg and spoon race to decide the winner.”

At time of publication 30 MLAs have definitely been returned, while the rest are shitting themselves and practising egg and spoon racing at the various count centres around the country.

However they’ll be relieved to know that the process won’t take as long as first expected.

“We’ll go home for our tea soon, have a couple of beers then come back and start again in the morning,” Pauline told us. “With any luck it’ll all be done and dusted in time for the 2020 election.”