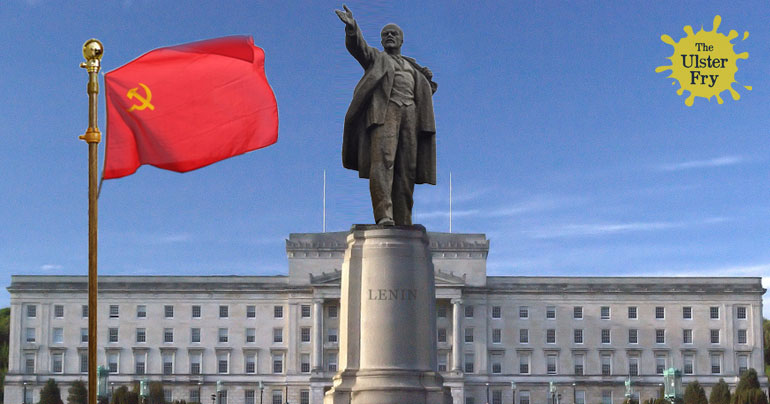 Following the double success of independent socialist candidates in West Belfast and Foyle yesterday, local bigots have joined forces to deny that people across the Province are starting to catch themselves on.

The move comes after two landmark wins for the People Before Profit party, who promote a brand of politics that is neither orange or green.

“We’ve come together today to reassure the people of Northern Ireland that we still hate being in the same room with one another” said Paul Bagg from the Northern Ireland Cross Community Sectarian Continuity Association.

“We won’t let these hippy bastards and their new fangled ideas about ‘just getting on with it’ ruin our long standing traditions of not getting along. We’ll stand side-by-side and aggressively fight their peaceful attempts to stop us from fighting!”

The loss of traditionally ‘nationalist’ seats in West Belfast and Foyle has been spun as a victory/loss by some though, who stupidly still believe that voting green moves you closer to a united Ireland, whilst voting orange solidifies Northern Ireland’s place in the union.

“Most people still haven’t caught on that the Good Friday Agreement made tribal voting defunct two decades ago” laughed Martin McGuinness. “We scare the shite out of prods that we’re gonna magically bullshit our way to a united Ireland, the DUP do the reverse to our lot, and ‘bingo’ ye’ve a load of wing nuts phoning into Nolan Show getting everyone riled up.  It’s a handy number!”

Following the success of People Before Profit, NI’s devout Christians, led by Susan Anne White, are now to form their own new niche political party – which will also look beyond orange and green issues. They intend to rival the DUP in using madcap biblical beliefs as the basis for governmental policy, regardless of how immoral.

Prophets Before People will launch this summer.