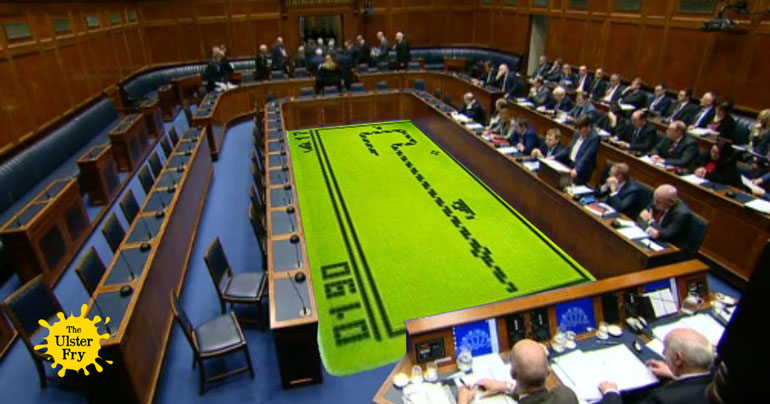 Finnish technology firm Nokia has stepped in to rescue the failing Northern Irish political system by relaunching one of its most iconic phone models as the answer to many of the Assembly’s problems.

“We have been watching developments in your country with interest,” explains Lumia Ericsson, head of the company’s Random Flights of Fancy Department, “and it occurred to us that your Assembly is a bit like a modern smart phone – it has shit battery life and is constantly crashing – so we thought, why not try to help you out?”

Plans for the new Stormont 3310 are already well underway. “Your politicians talk way too much,” she told us, “It would be much better if they had a character limit like on the old SMS system. Hopefully by the time they click through all the letters to send a message they’ll have forgotten what they meant to say and everyone will be better off.”

The continual political games played at Stormont will also get a retro reboot up the hole. “We’ll have none of that Petition of Concern shite that they’re always playing,” says Ericsson. “In future the only game available in the chamber will be Snake II – which may suit a few of the reptiles you elect, to be fair.”

However outgoing First Minister Arlene Foster has moved swiftly to counter the Finnish plan with her own ready-made replacement for the Petition of Concern mechanism.

“Let’s face it, even the name is all wrong,” she told the Ulster Fry. “It kinda implies that we’re remotely concerned what yousuns think.”

“From now on it’ll be called the Petition of No One Gives a Shite.”