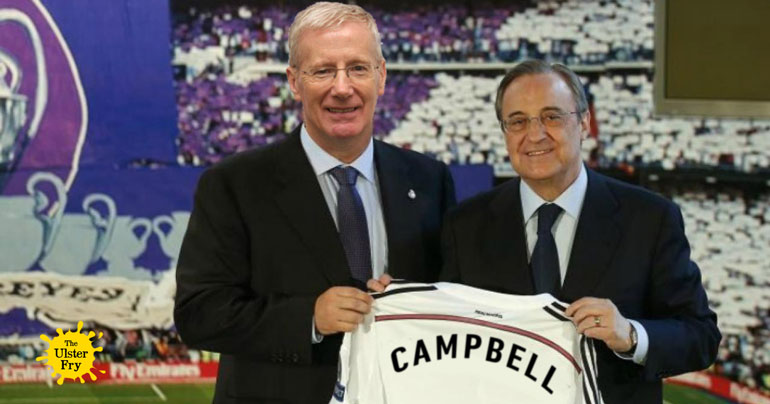 Europe’s top football clubs have made shock transfer swoops for some of the biggest names in Northern Irish politics, after an SNP politician claimed that our MPs “are worth more than Ronaldo”.

Mr Campbell has immediately set about ingratiating himself with the Spanish fans by demonstrating his infamous language skills. “Paella mi yogur,” he told a press conference.

Manchester United, meanwhile, have moved to sign roly-poly Upper Bann MP David Simpson to replace their goalkeeper David de Gea. “Have you seen the size of the fecker?” said Jose Mourinho. “Nobody will be able to squeeze a shot past that chunky hallion.” The deal is understood to be worth a staggering £300,000 a week to Mr Simpson plus bonuses, which are believed to be sausage rolls.

Arsenal have also crossed the Irish Sea to snap up Sammy Wilson in a swap deal which sees Chilean forward Alexis Sánchez join the DUP. “Sammy is a perfect fit for club,” we were told by Arsene Wenger. “My name has arse in it, my club’s name has arse in it, and he has a face like a slapped arse. What can go wrong?”

Sinn Fein MPs have also been the target of big money bids. Concerned that the may lose Eden Hazard to Real Madrid, Chelsea have signed new South Down representative Chris Hazzard. “Chris has agreed to drop a Zed from his name, so we’ll save a clean fortune on shirts,” said a club source.

However his party colleague Barry “keep ‘er lit” McElduff has turned down a move to Bayern Munich, saying he “wouldn’t be playing any garrison sports,” and was still hoping to get picked for Tyrone over-40s.