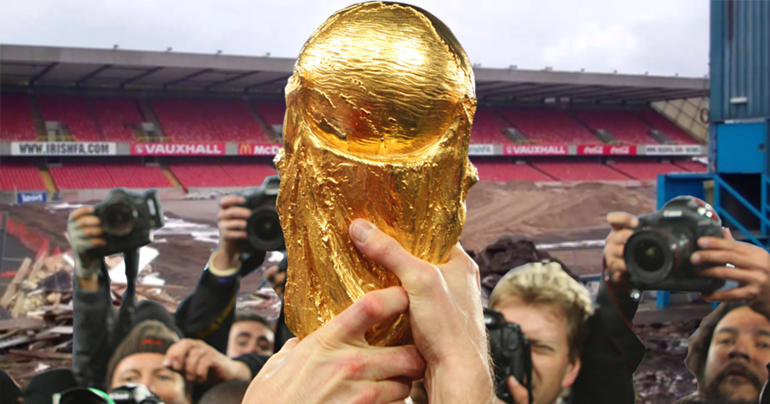 As the FIFA corruption scandal rumbles on, the Irish Football Association has offered to spare the governing body’s blushes and take over from Qatar as hosts of the 2022 World Cup.

“The Qatar bid has been riddled with problems from the outset, what with the lack of stadia and the searing heat,” said IFA spokesman Grant Funding. “Now we have allegations of bribery.”

“Well, here in Northern Ireland there’s not a cat’s chance of any bribery as we can hardly afford to pay for bog roll, never mind stuff envelopes full of cash. What we do have, however, are some of the finest football grounds in the world, and there’d be no danger of it being too hot, barring some kind of weather related catastrophe involving nuclear weapons being fired into the sun.”

“However Frank Mitchell assures us this would be too expensive to pull off as the price of rocket fuel has rocketed. He’s already looked into it. Firing nuclear weapons I mean, not the sun. That would be dangerous.”

“The final would, of course, be held at Windsor Park,” he continued, “assuming that it doesn’t fall into a hole, but other grounds around the country would also benefit. Smaller clubs like Ballyclare Comrades could host a couple of group matches, while bigger stadia like the Oval and Ballymena Showgrounds would be the venues for the knockout stage.”

Former Stormont Finance Minister Simon Hamilton has thrown his weight, and his beard, behind the bid. “With the World Police and Fire Games, the Giro d’Italia and the Irish Open golf, we’ve already proven that we can host top class events,” he told us. “When it comes to accommodation for fans, we have some of the finest caravan parks in the Western world, and as a small country transport shouldn’t be too much of a problem.”

“Fair enough, there are no train links at any of our airports, but we’ll build a huge park and ride at the maze and requisition every minibus in the country. That way we can drop people off at the Royal and they can walk the rest.”

Everyone was initially ‘delighted’ at the prospect of the hosting a World Cup, until someone pointed out that the country would be awash with flags from other countries right through marching season. Spinning it into a positive however, Mr Funding said “Nah, sure the final’s always around the Twelfth so that’s the closing ceremony sorted!”

“And when it all kicks off in North Belfast, we’ll save a fortune in fireworks!”